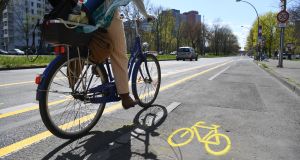 One of the new temporary bike lanes in Berlin, which have been widened to enable cyclists to keep further apart. Photograph: Annegret Hilse/Reuters

Asylum seekers in direct provision in Co Cork have come together to take direct action in the fight against Covid-19. They’ve started manufacturing washable masks to help combat the spread of the disease, and distributing them to direct provision centres around Cork, and to nursing homes and other vulnerable groups.

The Sanctuary Mask Initiative was begun when a sewing project for women in asylum centres had to be shut down due to the coronavirus crisis. With help from the charity Better Together, which seeks to empower women in direct provision, the women, from various centres around the county, were given sewing machines to make the masks, which are designed by Kinsale fashion designer Charlotte Cargin.

The masks are proving invaluable in direct provision centres, where asylum seekers are usually living in confined spaces with little opportunity for social distancing. But they’re also helping people in direct provision to make a meaningful contribution - and get paid a wage for their work.

“The Sanctuary Mask Initiative is designed to harness the strength of people living within the direct provision system, recognising their agency in responding to the Covid-10 crisis,” says Dr Naomi Masheti, manager of the Cork Migrant Centre. After we evenually emerge from this crisis, let’s repay these women by helping them emerge from direct provision.

Cyclists in Germany are getting more room to manoeuvre thanks to the appearance of “pop-up” cycle lanes across the country. The initiative sees cycle lanes being widened to make it easier for cyclists to maintain physical distance on their daily commute.

The idea took hold after local authorities in the Kreuzberg district of Berlin temporarily expanded two cycle lanes late last month, allowing cyclists to safely keep 1.5 metres apart. The trial was such a success that other districts in the city began to follow suit, and residents of other German cities applied to their local authorities for similar pop-up cycle lanes.

Restrictions on movement due to coronavirus means that vehicular traffic has been hugely reduced across Germany, so cyclists practically have the road to themselves. And, according to campaign group Environmental Action Germany, the reduction in emissions is doing wonders for respiratory health, with new research suggesting that air pollution may be contributing to higher death rates from Covid-19.

“The coronavirus is showing us that clean air is an indispensable asset,” says the group’s chair, Jurgen Resch, adding that the wider lanes will enable cyclists to exercise in fresh air, keep a safe distance from each other, and avoid collisions with cars and trucks.

Sport may be on an indefinite time out, but that doesn’t mean we have to stop watching the football on the telly. We can tune in to classic matches from the archives and relive the excitement of past Premier League clashes. Footie fans, denied their weekly fix of televised game action, are feverishly digging into the vaults in the hope of recreating that buzz from watching your team win the FA Cup or score a Champions League victory.

For some fans, though, rewatching an old match when you know its outcome feels somewhat pointless, but, according to Irish Times sports writer Ken Early, there are fresh perspectives to be found in these reruns, and interesting insights into how the game has changed over the past two decades. Although the standard of play has improved, reckons Early, a certain improvisational freedom has been lost. “All sorts of things once common in the game have been identified as inefficiencies and are being phased out: the long-range shots, the death-or-glory sliding tackles, the 70-yard goalkeeper punts, the swirling hopeful crosses.”

Getting it together in the Hebrides

Pop stars don’t like having to stay at home during the coronavirus crisis. They miss the industry bashes, the crowd adulation and the chance to step out with full entourage in tow. But one independent record label is finding self-isolation a distinct advantage.

Lost Map Records is based on the remote island of Eigg in the Hebrides, and over the past year the label has been inviting musicians to come to the island and write and record in splendid isolation. The musicians stay in a secluded bothy on the island, where their creativity can be let loose. The label provides them with instruments and equipment, and the musicians bring whatever they need to realise their musical vision.

The resulting music is being released under the banner of Visitations, and the second round of releases has just begun with an EP by Arthur King, a Los Angeles-based collective featuring Grandaddy frontman Jason Lytle. Needless to say, the sounds will reflect the unique sense of solitude that flows from creating music in such a far-flung location.

Happily fritter away the lockdown days with this recipe for simple sweetcorn fritters and quick tomato chutney, devised by chef Ali Honour of Ali’s Kitchen in Cork. This improvised recipe, says Honour, makes a tasty and versatile brunch or lunch dish, and is perfect for using up bits and bobs from the pantry before your next excursion to the shops in search of supplies.