China-Africa relations in crisis after alleged racism over Covid-19 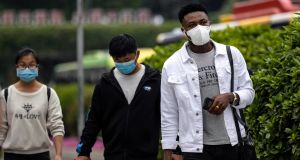 Video posted on social media over the weekend showed people of African descent being evicted from homes and hotels, sleeping rough and being refused service in shops. Photograph: EPA/Alex PlavevskI

Sino-African relations have been plunged into crisis after African officials reacted furiously to allegations that their nationals were being routinely discriminated against in Guangzhou, southern China, as alleged potential “carriers” of coronavirus.

Video posted on social media over the weekend showed people of African descent being evicted from homes and hotels, sleeping rough and being refused service in shops. Widespread reports alleged others have been forced into quarantine despite testing negative for Covid-19.

African ambassadors in Beijing wrote a letter to China’s ministry of foreign affairs condemning what they said was “the persistent harassment and humiliation of African nationals”. Families with young children had been forced to sleep on the streets and passports had been confiscated, they said.

“The singling out of Africans for compulsory testing and quarantine, in our view, has no scientific or logical basis and amounts to racism towards Africans in China,” the letter said, flagging the possibility of a backlash against the Chinese diaspora living on the African continent.

A second letter obtained by UN officials and signed by a group called the All African Community in Guangzhou accused China of “being at war” with Africa. “The inhuman treatment, hatred, and outright discrimination of Africans that is currently going on in Guangzhou, China is beyond expression,” it said.

In Guangzhou, Alush, an entrepreneur from Chad, said he had not left the city for four months and twice tested negative for coronavirus. Nonetheless, he was told by Chinese authorities to self-quarantine for 14 days because he was African, he said. “I’m really sad, I don’t understand,” he told the Financial Times. “I have my own company here, I pay my taxes, I have a work permit. It’s just not right how they are treating us.”

A Nigerian businessman who did not want to give his name said he had been evicted from his apartment and refused entry to a local supermarket when he tried to buy food and water. “I feel like Chinese people hate black people,” he said. “Not everyone hates us, I have some very kind Chinese friends who are like brothers but I hear people call me racial slurs on the subway, in shopping malls, on the streets.”

“A lot of my African friends in Guangzhou say they want to go back to Africa once the quarantine measures lift,” he said.

McDonald’s admitted to an incident in which a black person had been refused service, saying it apologised unreservedly and was conducting training on diversity and inclusion. “Currently, all customers are welcome to all our restaurants after body temperature check-up with health QR code issued by the local government,” it said.

Africans have long complained of experiencing racism in China. In 2018, China’s national broadcaster televised a blackface skit during the annual Spring Festival gala, the most watched television programme in the world. On another occasion, a Chinese laundry detergent brand had to apologise after it released an advertisement showing a black man getting “washed” into a lighter skinned Asian man in a washing machine.

But the latest events risked lasting damage, experts said, to a political, commercial and cultural relationship that has become increasingly important to China and Africa.

In several African capitals, ministers reacted angrily, breaking a normal taboo against open criticism of China, which is a big lender to many African governments. Between 2000 and 2018, Chinese institutions, including the China Development Bank, lent an estimated $152 billion to 48 African states, according to the China Africa Research Initiative at Johns Hopkins School of Advanced International Studies.

Chinese ambassadors to Abuja in Nigeria and Accra in Ghana were among those summoned by their respective host governments to give an explanation. In Addis Ababa, the capital of Ethiopia, Moussa Faki, chairman of the African Union Commission, said he had “invited” the Chinese ambassador to the AU to express “our extreme concern”.

Zhao Lijian, a foreign ministry spokesman, said Beijing was taking the allegations seriously. The foreign ministry would continue “close communication with the Guangdong authorities and continue responding to the African side’s reasonable concerns and legitimate appeals,” he said. The Chinese, he added, regarded Africans as “brothers and partners”.

One senior official in east Africa said many African governments felt betrayed as Beijing had specifically asked them not to repatriate their citizens when the coronavirus outbreak began in Wuhan. “There was a strong campaign from Chinese themselves to ask Africans not to panic and to keep their students and traders there,” said the official, who asked not to be identified by name. “So there’s a reaction: how could you do this to us?”

Eric Olander, managing editor of the China Africa Project website, said the events of recent days had “led to an unprecedented rupture in China-Africa relations”. In recent weeks, China had presented itself as an important benefactor to Africa, making large donations of medical supplies, such as masks and test kits sent by Jack Ma, the co-founder of Alibaba.

But, said Mr Olander, Beijing was in danger of losing that goodwill. “Time is quickly running out for the Chinese side to find a way out before sentiment on African social media metastasizes and further limits the options of African leaders to move on and focus on more pressing national priorities with the Chinese like debt relief”. – Copyright The Financial Times Limited 2020