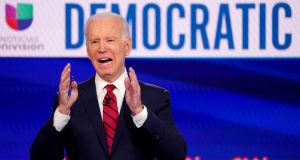 Critical to Joe Biden’s campaign will be his ability to embrace and mobilise the fired-up Sanders supporters and his many small financial backers. Photograph: Kevin Lamarque/Reuters

So Joe Biden will get a clear run at Donald Trump this autumn. Bernie Sanders, the 78-year-old socialist who had been front runner has bowed to the inevitable and pulled out. The impossibility of campaigning in the pandemic has changed the nature of the Democratic primary contest, confirming the former vice-president’s unshakeable delegate lead.

The pandemic has made the leadership character of the president – or lack of it – not just the central issue, but the only issue, to Democratic or potential Democratic voters. And electability seems to trump all considerations.

As the Democratic field of candidates narrowed, it had become clear that the progressive left, which has enthusiastically backed Sanders’s programme of Medicare for all and forgiveness of student debt, was more narrowly based in the party, perhaps no more than 20 per cent of its membership. Most crucially, on its fringes were many radical voters who were being persuaded that their favoured champion Sanders could not beat Trump in a face-to-face contest.

With a 300-delegate lead for the convention – which Biden has suggested should now be a virtual event – the latter was already leading Sanders by 58 to 33 per cent in aggregate polling.

Biden’s challenge is no slam dunk. Polling shows that Trump’s job approval rating remains surprisingly resilient at 45 to 50 per cent disapproval, his Republican base ever-loyal.

Critical to Biden’s campaign will be his ability to embrace and mobilise the fired-up Sanders supporters and his many small financial backers. There have been intermittent signs from some of them that they see Biden as no better than Trump and intend to abstain.

Biden tried to rally Sanders’s supporters in response to the latter’s withdrawal, promising “I’ll be reaching out to you. You will be heard by me. As you say: Not me, us.” Talks between the two teams are underway and announcements on significant programme changes are expected this week. This election will not be won from the centre ground.

1 Donald Trump is in trouble, and that could spell very bad news
2 Some larger stores to reopen on Monday ahead of schedule
3 House parties are being held ‘with abandon’, Holohan warns
4 O’Doherty and Waters ordered to pay legal costs of case against State over Covid-19 laws
5 Penneys will not reopen on Monday despite expected changes to lockdown rules
Real news has value SUBSCRIBE