The Irish Times view on legal costs: justice – at a price 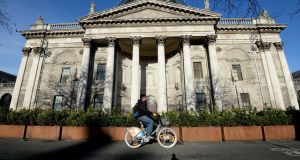 A new report has recommended increased use of video hearings, a dramatic reduction in paperwork and forms, as well as a move to simplify the often archaic language still in use in the courts. Photograph: Alan Betson

A litigant who represents himself or herself in court , it is said – mostly by lawyers – has a fool for a client. He may feel, however, that he has no choice, if he wants his case to be heard, given the cost of employing the real thing. But is real, wide access to justice by the financially-challenged really helped by encouraging and facilitating such self-representation on what would be a most unlevel playing field? So a report by the review group set up to make recommendations to reform the administration of civil justice in the State suggests. But “equality of arms” has to be a central part of equality of access.

Another document this week – a plan to tackle insurance costs approved by the Cabinet – found, however, that the legal costs in personal injuries claims taken to court are nearly 20 times higher than those that arise when cases are dealt with by the Personal Injuries Assessment Board (PIAB). And yet the injection of all that legal muscle does not change the reality that “the final award is only marginally higher than the settlement as assessed by the board”, the Government’s Cost of Insurance Working Group reports.

To be fair, the recommendation for the establishment of “an online information hub” to assist those wanting to bring proceedings without professional representation, is only one of 90 proposals from the civil justice review group, chaired by retired judge Peter Kelly. These include the increased use of video hearings, a dramatic reduction in paperwork and forms, as well as a move to simplify the often archaic language still in use. On reducing litigation costs the group was divided on whether the better approach is to draw up guidelines for costs levels or to give a new litigation costs committee the task of setting maximum cost level.

Nevertheless, Minister for Justice Helen McEntee has promised to back the findings and to publish an implementation plan as soon as February. It is a welcome and long-overdue initiative to improve the credibility of a courts system seen by many citizens as a plaything of the rich far beyond their reach.