The Irish Times view on Northern Ireland trade: a step in the right direction 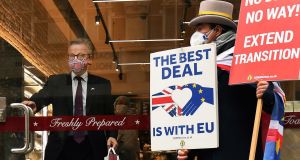 Agreement between the EU and UK on how to implement the Northern Ireland protocol to the Withdrawal Agreement, and specifically on the shape of Irish Sea controls on trade, is important and welcome. It is a necessary precondition to any agreement on the still unresolved future post-Brexit trade deal.

First and foremost, from an Irish perspective, it removes a serious danger of unravelling guarantees of no border obstacles between North and South and the implicit threat to important elements of the Belfast Agreement

But Tuesday’s EU-UK Joint Committee deal, negotiated by British cabinet office minister Michael Gove and European Commission vice-president Maros Sefcovic, though a necessary precondition, is far from providing any guarantee that the unbridged gulf on the separate trade deal will be bridged, or even hinting at a readiness to come up with the necessary compromises.

On the contrary, observers warn that the agreement and the important, linked willingness to remove treaty-breaking clauses from UK legislation has more to do with the UK ’s need to clear the way for talks on post-no deal trade agreements whether with the US or, inevitably, the EU itself. Not least in re-establishing its reputation as an honourable partner in negotiations.

US president-elect Joe Biden has made clear he is unwilling even to countenance such a deal while the Belfast Agreement is under threat, and an EU negotiation would almost certainly have stalled before it started over non-implementation of previously agreed deals.

The UK preoccupation with the US rather than Northern Ireland is evidenced in Wednesday’s announcement that it is ready to break with the EU in enforcing sanctions against the US over aircraft subsidies in an attempt to pave the way for a trade deal. The EU last month hit $4 billion of US products with tariffs of up to 25 per cent in retaliation for illegal state aid to aviation group Boeing. The move sends a strong signal to Washington that in talks the UK is now willing to take a different line from the EU on state aid and the related “level playing field” issues which are precisely those blocking a post-Brexit trade deal.

If seemingly intractable “level playing-field” differences remain, however, the removal of the noxious clauses of the Internal Market Bill should make it easier to agree the still-problematic “governance” clauses in a trade package. These relate to how and by whom a deal is policed and how those in breach are sanctioned. While not identical to the Withdrawal Agreement arbitration provisions, many of the same principles are involved, which the UK now appears to accept.

If we have greater clarity on how a no-deal scenario will play out, particularly on this island, the big question of whether there will be a deal remains frustratingly obscure.