World View: Without understanding, gulf between Republicans and Democrats can become a schism 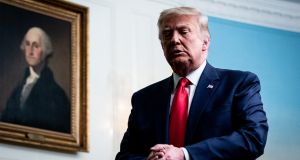 Donald Trump’s refusal to accept the election result echoes a similar refusal by Germany’s right to accept that Germany had been defeated in 1918. Photograph: Erin Schaff/The New York Times

I have been intrigued in the last few days by a number of insightful international press columns dissecting what Donal Trump has meant to his country’s political culture: enduring legacies that go beyond his toxic politics.

Other damage – the product of significant social trends surfed successfully by the US president – may be more lasting and damaging, and may even, historian Peter Turchin argues, be in the process of propelling the US inexorably and imminently towards major social breakdown. Turchin likens the country to a huge ship heading for an iceberg: “If you have a discussion among the crew about which way to turn, you will not turn in time, and you hit the iceberg directly.”

Part of the problem, the journalist and activist Jonathan Rauch would probably suggest, is that the crew may no longer be able to speak to each other because they have lost a common language or methodology of understanding, what he calls a “constitution of knowledge”, of what is going on.

Rauch sees in the all-pervasiveness of social media trolling and its eclipsing of traditional news, the deliberate demolition of trust in all facts, a dangerous and lasting undermining of the social consensus that underpins the key fabric of democracy, the consent to be governed.

'You have a situation now where there are many more elites fighting for the same position, and some portion of them will convert to counter-elites'

“America has faced many challenges to its political culture,” he argues (National Affairs ,”The Constitution of Knowledge”), “but this is the first time we have seen a national-level epistemic attack: a systematic attack, emanating from the very highest reaches of power, on our collective ability to distinguish truth from falsehood.”

“Unlike ordinary lies and propaganda, which try to make you believe something, disinformation tries to make you disbelieve everything.”

David Brooks, a journalist sympathetic to Republicans but hostile to Trump, (New York Times, “The Rotting of the Republican Mind”) shares his concerns and writes of the US facing a “crisis of epistemology”: “For those awash in anxiety and alienation, who feel that everything is spinning out of control, conspiracy theories are extremely effective emotional tools. For those in low status groups, they provide a sense of superiority: ‘I possess important information most people do not have’.

“For those who feel powerless, they provide agency: ‘I have the power to reject “experts” and expose hidden cabals’. As Cass Sunstein of Harvard Law School points out, they provide liberation: ‘If I imagine my foes are completely malevolent, then I can use any tactic I want’.”

Without a common understanding of the meaning of politics and democracy, a necessary bedrock to politics, the gulf between Republicans and Democrats can become an irreconcilable, bottomless schism, and society two irreconcilable camps drifting towards ungovernability.

Much like Weimar Germany, warns Die Zeit journalist Jochen Bittner (New York Times, “1918 Germany Has a Warning for America”). He argues that Trump’s refusal to accept the election result echoes a similar refusal by Germany’s right to accept that Germany had been defeated in 1918: “Their denial gave birth to arguably the most potent and disastrous political lie of the 20th century – the Dolchstosslegende, or stab-in-the-back myth.”

It was an unshakeable national narrative of persecution and being wronged that gained strength in the post-war years and laid the seeds of Hitler’s success. “Germany’s first democracy fell,” Bittner writes. “Without a basic consensus built on a shared reality, society split into groups of ardent, uncompromising partisans. And in an atmosphere of mistrust and paranoia, the notion that dissenters were threats to the nation steadily took hold.”

Turchin’s take on Trumpism is different but related (Atlantic, “The Next Decade Could Be Even Worse”, Graeme Wood). The historian who has made his name applying mathematical number-crunching techniques to the study of how societies evolve, sees the social base of Trumpism in “elite overproduction”. This, he says, is the tendency of wealthy modern societies to educate and expand the professional, managerial, scientific, and academic communities faster than the number of positions for their members to fill.

“You have a situation now where there are many more elites fighting for the same position, and some portion of them will convert to counter-elites,” Turchin argues. Precisely the gap into which Trump, and others like him, from Farage to Orban, have stepped.

While Marxists have seen class struggle as the engine of history, Turchin sees it in the struggle between sections of the ruling class elite. If the rise of Thatcherism was an expression in the Tory party of the frustration of the nouveau riche with the aristocratic Etonian old guard, Trumpism and Faragism are the harnessing of the “presque riche”, the frustrated, excluded middle class, to lead the revolt of the alienated but genuinely dispossessed. A winning alliance.

Turchin’s insight is important, even if his methods questionable. And it is precisely in this now-divided elite that we find the manufacturers and guardians of the once-unchallengeable constitution of knowledge.