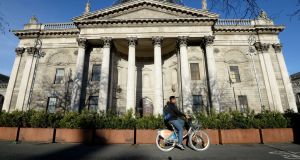 Some of the people worst served by the legal system are lawyers themselves, especially younger entrants or those who wish to join its ranks but find themselves facing insuperable obstacles. Photograph: Alan Betson

If one were to start from first principles and design a system for the provision of legal services from scratch today, it’s safe to say that it would be unrecognisable from the slow, antiquated and inefficient system we are forced to live with. That system is largely unchanged since Independence. Even as the country has grown more diverse, more complex, less tolerant of privilege and more accustomed to transparency from its institutions, the legal sector has somehow managed to trundle on, ever-resistant to external attempts to change how it works.

The old-fashioned rituals of the system, so often used to bash the profession, are in some ways an easy target, but they are also symbolic of that broader tendency to cling to old ways of doing things. And to say so is not a slur on all lawyers; some of the people worst served by the system are lawyers themselves, especially younger entrants or those who wish to join its ranks but find themselves meeting insuperable obstacles.

The time-honoured retort from the professional bodies is to say: but it works. For all its failings, the argument goes, the legal system delivers a strong, independent and effective service to those who need it. Tell that to anyone who receives a bill for even the most routine legal paperwork, let alone someone who finds themselves having to pay for a court action of any duration. Fundamentally, the system is designed and maintained by lawyers for lawyers, not for those who use it. The Legal Services Regulatory Authority, a legacy of one of the few senior politicians to take on these problems, Alan Shatter, is now up and running. It has taken on new functions and has begun to make useful recommendations for reform.

In a report to Minister for Justice Helen McEntee last week, the authority swerved the question of whether to do away with the distinction between barristers and solicitors and unify the two branches. That’s a pity; the change is probably inevitable in the long-run. But it did call for the breaking of the monopoly held by the Law Society and Kings Inns for the training of solicitors and barristers, respectively. Removing control of education and entry paths from these self-governing bodies has been recommended in the past, by the OECD and the Competition Authority among others. Their analyses have all concluded that doing so would improve supply, choice, innovation and dynamism in the sector to the benefit of would-be lawyers and the general public. For its part, the authority highlighted unnecessary duplication and a lack of independent oversight of legal training.

Important work will need to be done to ensure standards are upheld across an open market, but that’s not an excuse for further delay. McEntee has welcomed the authority’s ideas. She should now make implementation of its plan, and a wider overhaul of the legal sector, a priority for her term in office.