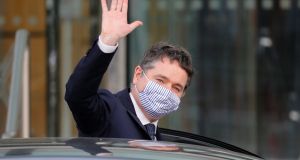 The banking deal is a win for Minister for Finance Paschal Donohoe, who took over as president of the Eurogroup earlier this year. Photograph: Crispin Rodwell

Euro zone finance ministers cannot be accused of rushing in progressing their plans for a banking union, now in train for more than seven years. So it is important to recognise that progress was made this week when agreement was reached to put more resources in place in a common fund to deal with any future banking collapse.

This will be achieved by reforming the European Stability Mechanism (ESM), the EU’s bailout fund, which will provide a backstop to the Single Resolution Fund, the vehicle for winding up failed banks. The move will increase the resources available to assist in the resolution of any banks, lessening the risk of governments running into trouble because of the need to bail out banks themselves. Nowhere in the euro zone is the importance of this more recognised than in Ireland.

The agreement is a win for Minister for Finance Paschal Donohoe, who took over as president of the Eurogroup this year. The deal has been a long time in the making, held up by insistence in some northern EU states that banks reduce non-performing loans and by sensitivities in Italy. It still needs approval by EU states. If this happens the new arrangements will be in place by 2022.

A banking union is important to stop the kind of “doom loop” which emerged between failed banks and governments during the financial crisis which started in 2008. There is no imminent threat of this, and tighter capital requirements in the wake of the crisis provide some protection, though clearly banks across Europe will face losses as a result of the Covid-19 collapse.

There is more to be done to complete the banking union. A vital and long-delayed step is a common insurance scheme to protect depositors. But this week was an important, if overdue advance. Combined with plans for a new recovery fund to fight the Covid-19 recession, financed by commonly-issued debt, it shows progress in building the European financial and economic infrastructure for the future, even if the current rows with Hungary and Poland demonstrate how politics can intervene to cause further doubt and delay.