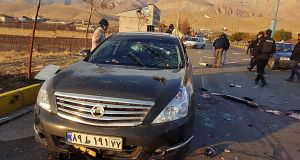 The damaged car of Iranian nuclear scientist Mohsen Fakhrizadeh after it was attacked near the capital Tehran. The scientist died at the hospital from his injuries following an attack by “armed terrorists”, Iran’s defence ministry said in a statement. Photograph: Irib News Agency/ AFP via Getty Images

It appears Israel, not for the first time, is playing with fire. The usual policy of non-denial notwithstanding, the sophisticated military-style killing of Iranian nuclear scientist Mohsen Fakhrizadeh had all the hallmarks of a Mossad operation.

The Israelis regarded Fakhrizadeh as a legitimate, high-value target and have been involved in multiple similar international assassinations. Iran is not alone in pointing the finger firmly at Israel.

Fakhrizadeh, a mastermind of Iran’s military nuclear programme, was head of Iran’s defence ministry’s Organisation of Defensive Innovation and Research. His killing will have been a blow, though by no means a crippling one, to a programme that is supposedly in abeyance following the signing of the 2015 nuclear deal, the repudiation of which by Donald Trump in 2018 has allegedly seen research surreptitiously reactivated.

Israeli prime minister Binyamin Netanyahu, obsessed with the potential nuclear rearming of Iran, has presumably decided that he can preempt the incoming US administration’s return to the nuclear treaty in the window of opportunity of a sympathetic Trump’s last months in power by provoking Iranian retaliation.

The Israeli action would certainly have happened with the foreknowledge, and probably explicit consent, of Washington. That is unlikely to have been forthcoming from a Joe Biden administration.

The attack in Iran chimes completely with what are reported in Washington to be attempts by the old administration to do all it can to inhibit the dismantling of Trump’s Middle East legacy, not least the repudiation of the nuclear accord.

There are suggestions the purge at the top of the Defence Department was a precursor to a last-ditch military escapade abroad, and Trump is reported to have sought advice on the feasibility of air strikes on Iran’s nuclear facilities. The visit last week by secretary of state Mike Pompeo to Saudi Arabia is seen as likely to have been about a united front against Iran as much as so-called “normalisation” of relations with the kingdom.

Despite threats of retaliation, Tehran currently appears to be acutely sensitive to the politics of the US interregnum and the need not to box Biden into a corner. Its retaliation earlier in the year for the US drone killing of Qassim Suleimani, the commander of the elite Quds force, was sufficiently low-key not to prompt a counter-strike. President Hassan Rouhani said revenge would happen “at the right time and appropriately” but that Iran was “intelligent and wise enough not to be trapped in the Zionists’ plot”.

It would not be unheard of for Iranian hardliners to take such revenge into their own hands, but Iran, if it wants a deal with Biden, would be well advised to do what it can to stay its hand.