The Irish Times view on public sector pay: a question of fairness 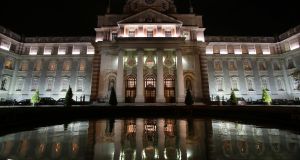 Whatever the obligations of the Government to honour existing commitments on senior public servants’ pay, it does need to step back and consider its approach. Photograph: Niall Carson/PA Wire

Just normal business and meeting commitments. That was the explanation given by the Government for a decision to approve a pay increase for the judiciary and a separate green light for a hike in the pensions of 390 senior public servants who retired before 2012, among them former ministers and taoisigh.

The move on judicial pay was formalising increases which had already gone through in October as part of the restoration of cuts made during the financial crisis. The pensions measure falls under the same heading – the Government says it had no choice. Nonetheless the lower-paid and those in the private sector – particularly in sectors hit by the Covid-19 crisis – will note the contrast with their own incomes and economic prospects.

The timing of all this is poor – particularly in the light of the controversy over student nurses. In particular the increases given to the already very generous pensions of former top public servants and politicians shows that a chance for reform was missed during the last crisis. Permanent change was needed – not temporary cuts. The contrast to the pensions available now in the private sector could hardly be more stark.

Whatever the obligations of the Government to honour existing commitments, it does need to step back and consider its approach. Each decision – to increase pay, or pensions or whatever – is justified or at least enabled by the availability of cheaply borrowed money. If interest rates stay low, it will indeed provide more flexibility for the exchequer in the years ahead. But this flexibility is not endless. We face choices and one of them is how to help the tens of thousands of younger and generally lower-paid people whose lives have been turned upside down by the pandemic.

There are trade-offs here and big questions of inter-generational fairness. The Government has removed the proposal to increase the retirement age to 67 from the social welfare Bill introduced this week, for example. But the Fiscal Advisory Council suggests this will cost over €500 million next year alone. The era of freely borrowed money does not remove the need to make choices.