EU has sovereign right to tell non-members: you cannot expect a free ride in our market 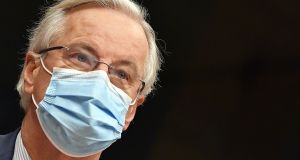 We have been here before, many a time, in this Brexit marathon. The temptation is to think it will all be ok, that sense will prevail, that the mutual interest in getting a post-Brexit trade deal will prevail, and that this latest brinkmanship is merely a manifestation of the much-promoted but dubious idea that the EU works this way. That the darkest hour is always just before the dawn.

If only. As the negotiators on the two sides, the British and the EU, scramble desperately to meet the new self-imposed deadline of Wednesday, ahead of the EU summit, three seemingly intractable issues remain: access to UK fisheries, competition issues or the so-called “level playing-field”, and related governance questions about how to enforce and how to interpret the rules. There is still a very real possibility that the gaps will not be bridged.

Rumours on Sunday that a deal on fish was within grasp were yesterday denied, although the issue appears now to be a quantitative one – how much access, and what scale of quotas – rather than one of principle. The two positions are reconcilable with political will.

The refusal of the UK to accept any external, specifically EU, constraints on its “sovereign” right to determine state subsidy levels is more problematic, an issue of principle rooted in the very nature of the single market. The UK may have regained its sovereign rights by leaving the EU, but the EU also has the sovereign right – and obligation to members – then to say to non-members that you cannot expect a free ride in our market. Leaving has consequences. The right to use such tools to boost the competitive edge of UK businesses is incompatible with the idea of a level playing-field and hence with free access.

The governance issues are complicated by the sovereignty argument and the UK’s view that the Court of Justice of the EU can play no part adjudicating on treaty ambiguities. EU concerns that the UK remains determined to reintroduce provisions in the Internal Market Bill that allow it disregard elements of the withdrawal agreement on goods moving to Northern Ireland, along with similar provisions in the Finance Bill, have been allayed by private indications from the UK that they will drop the provisions if a trade deal is agreed. These are, after all, they argue, merely fall-back measures in case of a no-deal.

But, with the very real prospect of a no-deal, the EU must now make it explicitly clear to the UK that the political costs of repudiating aspects of the withdrawal agreement do not go away in a no-deal context. An eventual return to the table in a few months to negotiate a trade agreement as a third country will not be possible unless previously agreed treaty obligations are honoured. That is also a message that Washington will be sending in the context of any UK/US agreement.