The Irish Times view on Downing Street resignations: a reset in London? 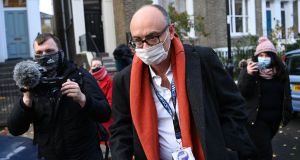 Hope that the latest abrupt staff shuffle in Downing Street could be a sign that Prime Minister Boris Johnson is clearing the decks of obstacles that might obstruct him from doing a last-minute deal in the Brexit talks is dismissed by observers in London as wishful thinking.

The departure on Thursday of communications director Lee Cain, followed on Friday by chief adviser Dominic Cummings, effectively decapitates the Vote Leave Brexit campaign cabal which has surrounded the PM and largely driven the Downing Street operation. Yet Johnson is not said to take much prodding on Europe with some describing him as Downing Street’s most rabid Brexiteer. The talks on the future relationship, which resume next week, need a significant push from the impulsive Johnson, a man who enjoys taking political risks. But that may not be forthcoming and the prospects of a deal are in the balance.

The sidelining of the Vote Leave team, however, may represent a significant change in direction for an accident-prone administration that has lost the trust of many of its backbenchers, is performing poorly in the polls, and is in deep trouble over its incompetent management of the pandemic. It has also had to perform a number of embarrassing u-turns, in one case twice on the same issue of school meals at the behest of a young footballer. Fairly or unfairly, Cain and Cummings are blamed.

Some Tories hope it’s more than a change to a softer tone in PR operations – Cain opposed the appointment of a new more media-friendly press officer, journalist Allegra Stratton – and that the resignations may mark what one commentator calls a “reset of the premiership”; from a government focused on its new “red wall” voters captured from Labour and in need of a change of tack to usher in “a new era of cuddly Conservativism”. A return to a One Nation Toryism once espoused by Johnson. Whether the leopard can change its spots is another matter – another case, perhaps, of wishful thinking.