The Irish Times view on Covid restrictions: Plotting a path out of Level 5 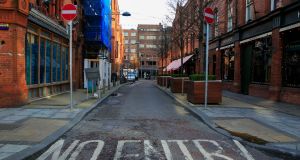 Half-way through the six-week Level 5 lockdown, all the main indicators show that significant progress is being made in bringing the latest spike in Covid-19 infections under control. The reproduction (R) number is estimated to be at 0.6 and whereas three weeks ago there were 1,200 reported cases each day, daily numbers are now less than 500 and declining by 5-7 per cent each day. That progress is encouraging. It confounds the assumption that a weary public would not comply with a second lockdown, and shows again that when the virus is denied opportunities to spread, it can be tamed. That it is being achieved while schools remain open vindicates the Government’s decision to prioritise keeping children in the classroom.

However, business closures and restrictions on public movement are taking a heavy toll on people’s lives and livelihoods. That’s why this period must be used to plot a path out of lockdown in three weeks’ time and to produce a plan for the coming months. Important as the festive period is to all of us, the “save Christmas” mantra is in danger of coming to symbolise the short-term thinking that we need to avoid.

The most likely scenario is neither a total reopening nor an open-ended Level 5 but something in between. For that balance to be struck, however, Government must focus on four areas. First, we must learn more about where transmission occurs. To do that, we need, as part of the contact tracing process, to research infected people’s movements more deeply and to scrutinise that data carefully. Second, international travel must be managed sensibly with a variegated approach that takes into account the incidence of the disease elsewhere. Third, an all-island approach to fighting the disease is now simply essential. The self-defeating row in the Northern Executive this week produced an outcome that defies public health advice and will jeopardise progress across the island, given that the North’s case numbers are still four times higher than south of the border. If approaches cannot be aligned between the jurisdictions, both will fail to control the disease.

Finally, the State must ensure it does not repeat the mistakes of the summer, when the test-and-trace infrastructure was reduced as case numbers declined. That meant that when the virus did re-emerge, we were too slow to stop it in its tracks. We know now that large-scale testing is vital even when numbers are low, and that serial testing of high-risk settings, such as meat plants, and among vulnerable groups, including nursing home residents and asylum seekers, is vital.

This week brought promising news on the hunt for an effective vaccine, but it would be dangerous to assume that the virus can be eradicated any time soon. So while we can hope for a speedy vaccine, we must plan on the assumption that it’s still a long way off.