The Irish Times view on Biden’s election: Time for a most welcome reset

Call for unity, bipartisanship regularly been catchcry of presidents-elect after bitter campaigns 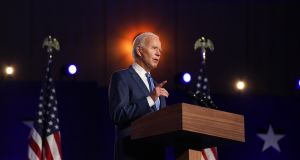 President-elect Joe Biden’s appeal on Saturday night was all about healing, the United States working together, “restoring the soul” of America.

As the country emerges from its national nightmare, economically and socially battered, divided, crippled by coronavirus daily infecting record numbers over 120,000, its politics poisoned by racism and xenophobia, its environment hobbled by science denialism and a pandering to polluters, healing was never more needed.

Time for a reset, as Biden put it, a “point of inflection” in the country’s history after four years of a thuggish, dysfunctional presidency. And Biden certainly has a mandate for it, a record vote of 75 million on a record turnout, a strong four million majority.

Yet the “motherhood and apple pie” call for unity and bipartisanship has regularly been the catchcry of presidents-elect after bitter elections, an aspiration always swiftly disabused by the most partisan of cultures in Congress. It takes two to tango, and the Democrats have not managed to swing the Senate, whose majority still hangs by a thread on a further two special elections in Georgia.

To expect the Republican Party and its leader in the Senate, Mitch McConnell, to change their spots now, to embrace rebuilding and co-operation on a Biden agenda, is unfortunately wishful thinking in the extreme.

And it is unclear if President Trump will do anything to assist a smooth transition. On the contrary, his record and his tweeting since the result became clear suggest he is determined to do all he can to stall and sabotage. He has time between now and the inauguration on January 20th – 72 days – to wield a wrecking ball to public administration, to do incalculable damage to the US, not least in impeding the work of the coronavirus task force Biden is assembling which will not be allowed to take the reins until after inauguration.

Although the proliferation of legal cases he is initiating to challenge the allegedly fraudulent election appear unlikely to impress even the most friendly judiciary in generations, he is likely to be able to pardon a swathe of cronies and quite possibly himself ahead of the scrutiny his personal affairs face in the courts after he leaves office.

Biden faces an uphill battle from the start in this most divided of countries. The US needs another FDR, another Barack Obama – Joe Biden, the consummate insider and conciliator, has yet to show he has the capacity to be transformational. But nothing should take from the importance of his victory and the historic significance of that of vice-president-elect Kamala Harris, the first person of colour and first woman elected to the post. Or from the collective sigh of relief being breathed across the world.

And, of course, Ireland can celebrate a son of the oul’ sod in the White House.