The Irish Times view on Hong Kong: one country, one system 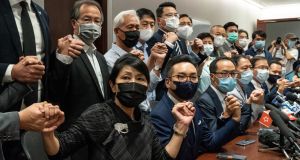 It is now impossible to sustain China’s characterisation of Hong Kong as operating under a “one country, two systems” political dispensation. The last vestiges of the 1997 promises Beijing would preserve the former colony’s political autonomy until 2047 have been shredded.

Its latest legislative diktat on Wednesday bars from Hong Kong’s legislative council anyone who supports independence, opposes the national security law, refuses to recognise Beijing’s sovereignty, seeks help from “foreign countries” or commits “other acts that endanger national security”. In other words, supports any other “system” than authoritarian Beijing control.

An official statement that Hong Kong had to be “governed by patriots” confirmed as much.

The result: the disqualification of four members of the opposition from the Hong Kong assembly because they promised to block government legislation if they won a majority in upcoming elections, and now the resignation of the other 15 pro-democracy opposition members of the council in solidarity. One of their number, Claudia Mo, was defiant: “We are quitting the legislature only at this juncture, we are not quitting Hong Kong’s democracy fight”.

Continued membership would only serve to legitimise a toothless puppet of Beijing. With further candidate disqualifications expected, the 2021 election is expected to see only pro-establishment lawmakers represented.

The new curbs on politicians represents a sad but inevitable next step of the crackdown on civil society protests imposed by Beijing in June .

The move has brought widespread condemnation from around the world with US politicians threatening further sanctions against Beijing. Its timing in the dying days of the Trump administration may also be seen as a testing of president-elect Joe Biden. The latter, however, gave some indication yesterday that he would push back against China when he pledged that US security guarantees apply to Japan’s administration of the disputed Senkaku Islands, one of the most important security flashpoints in east Asia.