The Irish Times view on Israel/Palestine: a new balance of forces 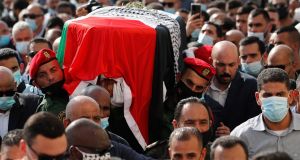 Saeb Erekat will be missed. The death of the 65-year-old Palestinian long-time chief negotiator, ally in turn of Yasser Arafat and Mahmoud Abbas, and mainstay of the Fatah movement, deprives Palestinians of a well-regarded and forceful articulator of the internationally backed two-state solution to the conflict. But also, perhaps as importantly, of a dogged optimist who refused even in the darkest times to write off the hope for peace or his conviction that a military solution would never work.

His death and the simultaneous US election of Joe Biden as president-elect bring new elements of uncertainty to the deeply stalled process.

The loss by Israeli prime minister Binyamin Netanyahu of a key ally in Washington, Donald Trump, albeit to a new president he gets on well with and has a reputation as a supporter of Israel, is likely to mark a significant shift in US policy both regionally, notably towards Iran, and to the Palestinians. Biden is a strong supporter of the two-state solution and has made clear his opposition to Netanyahu plans to annex the West Bank, currently on hold.

But although Biden is expected to move quickly to reaffirm US commitment to the Iran nuclear deal, observers of the Democratic foreign policy debate in Washington caution that the new White House is unlikely to put Israel /Palestine at the top of the agenda of a new administration focused on coronavirus, climate action and foreign policy issues in Asia, Europe and the Americas.

A Biden administration may not undo Trump decisions like the re-siting of the US embassy to Jerusalem, or invest capital in major talks initiatives, but, in diplomacy by proxy, is likely to lean on the Saudis and other Arab states to demand more concessions from Israel on Palestinians’ behalf in return for normalisation of their relations.

The permanently embatted Netanyahu – weak in the polls, facing a third wave of coronavirus, and preparing for trial on corruption charges – will rue Trump’s departure, a last justification for his continued rule. Opposition MPs and coalition allies alike are openly discussing ousting him.