The Irish Times view on the US election: a stress test for American democracy 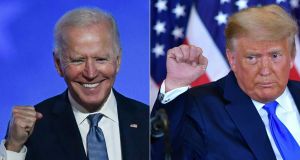 A deep fissure runs through American society. What separates the two camps is not policy preference but a fundamental binary opposition over what the republic stands for, who it comprises and where it is going. Photographs: Angela Weiss and Mandel Ngan/ AFP via Getty Images

For so many, in the United States and across the world, this was to be a reckoning, a moment of catharsis after the trauma of the past four years. The conditions looked propitious: a manifestly inept incumbent, having catastrophically mismanaged a deadly pandemic and run an ill-disciplined re-election campaign, faced a competent, likeable challenger with a popular programme and formidable financial firepower. Pre-election opinion polls suggested a comfortable win for Joe Biden, which would propel the Democrats towards a majority in the Senate. Perhaps more importantly, the 2020 election would amount to a repudiation not only of Donald Trump but of Trumpism itself, allowing the country to reunite behind its higher values.

That turned out to be an illusion. For those who believe in those values of openness, humanity and social solidarity, the election results have instead produced a portrait of a country deeply and bitterly divided on the most basic questions.

With counts continuing in swing states that will decide the outcome, Biden is well placed to defeat Trump. Reclaiming the White House for the Democrats and making Trump a one-term president would of course be an immense and important achievement; the United States will be a better country for every day that Trump is not in power. But even if Biden is victorious, and even if American democracy passes this stress test and a smooth, peaceful transition of power occurs in January, the country’s underlying problems have not gone away; they are more apparent.

This was not a rejection of Trumpism. More than 48 per cent of voters, in a high-turnout election, looked at the past four years and decided they wanted more. Trump’s support was more broadly based than his critics like to believe: he won a majority of white women and voters in small towns or rural areas, according to exit polls, but he also won 48 per cent of suburban voters, 37 per cent of city voters, 42 per cent of graduates and 36 per cent of Latino voters. The red/blue map describing a divided country is not new, but this is not mere party-political division. A deep fissure runs through American society. What separates the two camps is not policy preference but a fundamental binary opposition over what the republic stands for, who it comprises and where it is going. The two sides barely speak, and as Trump’s presidency revealed, one is openly hostile towards the basic norms of democratic life.

A victory for Biden would be a relief. But the relief would be short-lived, because we now know the answer to a question that hung over the past four years: was Trump – was Trumpism – an aberration? It was not. So while Trump will eventually fade from view, the reasons for his rise will remain. And until the republic can resolve the poisonous tension that now defines its national life, its democracy will remain in peril.