The Irish Times view on the US election: the looming battle of attrition

Winning the presidency would be a supreme achievement for Joe Biden, but he may soon find that winning power was more straightforward than exercising it 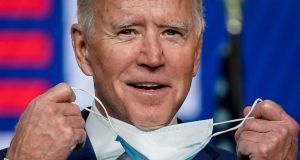 If the US senate remains in the control of Republican majority leader Mitch McConnell, a President Biden would assume power in January knowing that progress on any of his flagship domestic reform policies, from green technology revolution to free tuition for middle-class college students, would be liable to get bogged down in a battle of parliamentary attrition. Photograph: Photo by Drew Angerer/Getty Images

Donald Trump’s tenure in the White House demonstrated the vast powers that reside in the office of an American president. His successor’s presidency risks showing the very opposite: that a head of state contending with a hostile Senate and a divided ruling party can quickly run up against the limits of his authority.

The scenario is not yet set in stone. A late surge in key Senate races could yet tip the chamber towards a Democratic majority. But if, as seems more likely, the upper house remains in the control of Republicans, a President Joe Biden would assume power in January knowing that progress on any of his flagship domestic reform policies would be liable to get bogged down in a grinding battle of parliamentary attrition. The Republicans would be in a position to block supreme court appointments; increasing the size of the court would be off the agenda entirely.

The effective running of the US government presupposes a certain good faith and a spirit of compromise between the presidency and the Houses of Congress, but the current mood of zero-sum partisanship has produced such a toxic atmosphere that enacting far-reaching domestic reforms appears all but impossible when the presidency and Senate are controlled by rival parties. In this climate, it’s not hard to envisage the sort of gridlock that would make the country look close to ungovernable.

The split could stymie Biden in other ways. A hostile Senate could use its influence over cabinet appointments to shape the Biden administration in ways it finds more amenable. If that meant keeping leading voices of the Democratic party’s progressive wing out of key posts, and driving the president’s agenda towards the centre, the fissures within the party, smoothed over in the past year by the need for unity during the Biden presidential campaign, would inevitably resurface.

That leaves foreign policy, an area in which US presidents enjoy more freedom to act and the area in which Biden has specialised. It is here that a Biden administration could have the greatest impact, beginning with the mending of relationships fractured during the Trump years and encompassing the reversal of current policies, such as on the Paris climate agreement or the Iran nuclear deal. Washington would reassure and re-engage its allies and the White House would once again become a cold house for autocrats. Yet as previous administrations have found, it is domestic policy that consumes the most bandwidth in the White House, and the time and energy the government would be forced to expend in trench warfare with the Republicans on each policy item would take its toll. Winning the presidency would be a supreme achievement for Joe Biden, but he may soon find that winning power was more straightforward than exercising it.