The Irish Times view on Leo Varadkar: inappropriate and wrong 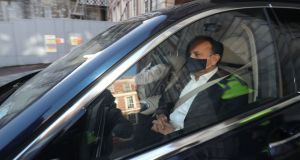 Leo Varadkar survived the Dáil grilling over his leaking of a confidential document when he was taoiseach in April 2019, but his authority and reputation have been damaged by his actions. Although he has expressed contrition, his behaviour was inappropriate, wrong and foolish. The apology and explanation given to the Dáil by the Tánaiste for his “errors of judgment” appear to have been enough to satisfy his coalition colleagues in Fianna Fáil and the Green Party and may be enough to enable him to survive the political storm.

There is something unseemly about giving confidential information to a personal friend, regardless of the motive

Nonetheless, the disclosure about the way Varadkar leaked a confidential document containing the details of a new GP contract agreed between the Department of Health and the Irish Medical Organisation to a friend who headed a rival doctors’ organisation diminishes him, his party and politics.

Varadkar’s behaviour demonstrated a cavalier attitude to proper procedure and raises some doubts about his approach to senior political office. Following the rules can sometimes appear too restrictive to politicians in a hurry to get things done but they are there for a reason and should not be flouted by a taoiseach of all office-holders.

It should be said in Varadkar’s favour that there was no personal gain involved but the claim that he leaked the document simply to encourage doctors to back a deal which was in the public interest is not the whole story either. There was clearly a political advantage for the government in the drive to get all of the doctors’ organisations to support the deal and there is something unseemly about giving confidential information to a personal friend, regardless of the motive.

One of the coalition’s vulnerable points has been the way in which Varadkar has sought to upstage Martin. He should be slow to do so again

On the political front, the controversy is another embarrassment for the accident-prone three-party coalition but it does not appear so far to have undermined its long term viability. Taoiseach Micheál Martin handled the matter deftly, letting the public know of his concern at the Tánasite’s actions, while not raising the stakes unnecessarily or attempting to make political capital out of his political partner’s difficulties. If the Government comes through the controversy without further damaging revelations, Martin’s authority within the coalition and with the general public should be enhanced.

A potential silver lining for the Government is that the episode should chasten the Tánaiste and give him pause for thought the next time he thinks it is to his political advantage to engage in solo runs. One of the coalition’s vulnerable points has been the way in which Varadkar has sought to upstage Martin. He should be slow to do so again now that his own poor judgment has been exposed. More crucially, the political loyalty shown to him by the Taoiseach in the course of the controversy deserves to be reciprocated.