Breda O’Brien: We need to mobilise our empathy to save the planet 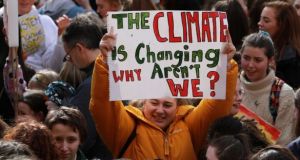 Activating our empathy may be a potent antidote to that learned helplessness, says Breda O’Brien. Photograph: Nick Bradshaw/The Irish Times

A British newspaper had a thoughtful piece on their website about fires in the world’s great forests (not just the Amazon) and the sidebar contained a sponsored feature called “How to make the ultimate Brazilian BBQ beef burgers”.

Apparently, algorithms do not have irony detectors. In July, the Bureau of Investigative Journalism, in conjunction with the Guardian, published an investigation of JBS, a Brazilian company “which slaughters a staggering 13 million animals every single day and has an annual revenue of $50 billion”.

The list of scandals is endless: from bribery of hundreds of politicians, which led to its holding company being fined a record $3.2 billion, to its former boss, Wesley Batista, being jailed for six months for alleged insider trading. Add to that illegal grazing of cattle in protected areas, concerns about animal welfare, and production standards. Cheap Brazilian meat begins to look very expensive indeed as we trundle towards the Mercosur trade deal.

And small Irish farmers will only have a future if we are willing to support them to farm more sustainably. That means two things: being willing to eat meat more infrequently and to pay more for it. Locally grown high-quality beef is far better for the environment and if seen as a treat rather than something to be eaten two to three times a day, can be part of care for the earth.

Farmers are a vital part of the climate change conundrum

In her book, Wilding, the delightfully named Isabella Tree suggests that old-fashioned farming practices combined with consuming far smaller amounts of high-quality meats are a better answer than veganism.

Among the reasons she gives are that large herbivores are important for the preservation of the landscape and are an important part of maintaining biodiversity.

She and her husband decided in 2000 to allow the animals on their West Sussex farm to live in herds and claim that it is possible reduced methane emissions by up to 70 per cent by farming so that the animals eat wild plants such as angelica, common fumitory, shepherd’s purse and bird’s-foot trefoil.  They do not use chemical fertilisers and have astonishing biodiversity on their lands, basically by doing what their ancestors did.

You do not have to have a farm of 3,500 acres where the address is Knepp Castle Estate as Tree does. Farmers are a vital part of the climate change conundrum.

The complicated ethics of trying to live sustainably cause some of us to just give up. Activating our empathy may be a potent antidote to that learned helplessness.

In a Washington Post article last week, Jamil Zaki, director of the Stanford Social Neuroscience Laboratory, suggested that we are not hardwired to have empathy when the consequences of our actions are far off, and when they will be experienced by strangers who have yet to be born.

And yet, indigenous peoples, despite the alleged lack of hardwiring for it, managed to develop a sense of commitment to the earth. In the case of the Iroquois nation, they made a commitment to consider the impact of every major decision for the next seven generations.

Zaki is not suggesting inaction. He has written a book, called The War on Kindness, which emphasises that empathy is a skill which can be developed, rather than a fixed quality.

But those of us who are parents or have small children as relatives of any kind are already deeply committed to care for them.

Dr Lorna Gold, who works for Trócaire, has written a moving book about the moments when she realised that if she loved her own boys, she would have to fight for their future and the future of the planet.  In Climate Generation, Awakening to Our Children’s Future, she describes both the terrifying challenges and the sheer determination she has to make a difference.

If her children were being bullied or seriously sick, she would act like a lioness defending her cubs. She deploys the same energy for caring for the planet that sustains her boys.

She also talks about the healing power of nature. So many of us in Ireland are blessed to live near or in natural beauty. If we can gaze at the Atlantic waves we love and see that they are being choked with plastic produced by the fossil fuel industry, we might awaken the kind of thinking our indigenous peoples have been capable of for a very long time.

Despite the scale of the crisis, for those of us in the developed world, the key must be to begin somewhere.  For example, churches of all denominations are involved in the eco-congregation movement, which emphasises becoming more sustainable in parishes and other church organisations. Pope Francis has given a special urgency to protecting the environment, including an upcoming special synod on Amazonia in October.

Of course, none of these gestures is enough by themselves. We need to put pressure on political leaders and corporations. The latter often indulge in greenwashing, pretending to care for the environment in a cynical attempt to increase consumption. The majority of politicians are reactive. Let us join our children and give them something to which to react.

1 A vegetarian and a non-drinker visit Ireland: here’s their verdict
2 Leaders’ debate: For one dramatic moment, the Taoiseach is like a rabbit in headlights
3 ‘I get paid to learn. I couldn’t recommend it enough’
4 Election 2020: Parties warned of ‘insane’ election promises as Varadkar offers Martin coalition
5 Miriam Lord: The left woos Mary Lou as FG tries to keep Ireland's nanas and granddads happy
Real news has value SUBSCRIBE