What the North needs now is a gigantic talking shop

With all sides involved, issues that now seem intractable can become less volatile 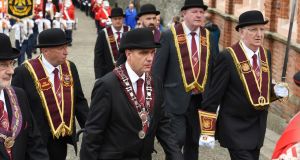 “We’ll all be rooned, says Hanrahan, before the year is out.” That old piece of doggerel from Australian-Irish bush poet John O’Brien captures the mood of the moment, most especially if you live in the North. No-deal Brexit, dissident republicans, snarling politicians, empty government rooms, hate-filled pageants and negative economics are providing Hanrahan with an abundance of fodder. Added to this are several high-profile journalists who, on a near-daily basis, are describing increasing unrest in working-class nationalist and unionist communities. Unrest that, according to them, is likely to drift back to violence, though not on the scale or intensity of the past.

The Apprentice Boys’ annual parade through Derry on August 12th got pulled into this vortex of negativity. Having been one of the earliest spurs for inter-community violence, it had been transformed into a prototype of how difference can be accommodated and even celebrated in a shared space. Despite the years of trouble, nationalists in the city had concluded that the Apprentice Boys had the right not just to parade but to be accommodated and respected. The Apprentice Boys’ decision to enter talks about the parade with their fellow citizens was initially criticised by other branches of Orange associations who were not from Derry. The Boys’ response was to tell them that Derry was not Larne. They insisted that they had the right to march in Derry, but equally had a responsibility to engage the wider community in a sensitive and respectful manner. Experience, history and demographics underpinned the need and the inevitability of that accommodation. It took much talking and compromise before the final deal was arrived at, but that initial recognition of the need to engage and talk was the foundation that became known as the Derry model. It was essentially a recognition that demographics had changed and that the only peaceful way forward was to find compromise that both sides could live with.

For the last 20 years or so, the parade had taken place with little and diminishing tension. For a few days it appeared that the events of this year were going to shatter all that had been achieved. The nationalist community took offence to one band parading with an insignia of the Parachute Regiment and referencing soldier F who is due to face trial in connection with Bloody Sunday. The unionist community took offence to the way the police handled the parade and the questioning of the band on its way home. There was much commentary as to how the model had been destroyed and how difficult it would be to resurrect it. Those fears were lifted when the Apprentice Boys issued a statement recognising the hurt that had been caused to the local nationalist community. The statement was a bit of a gunk to the DUP leadership outside of Derry who had engaged in defending the band and criticising the police.

The lesson from this story is that there is one and only one sure way of dissipating all the dangers and threats that presently confront this part of the world. It is to construct a table, a room, a forum into which all the political, economic, social differences can be deposited and at which all the differing political factions can propose their solutions. It will be a gigantic talking shop that will last for years. The rationale for the table/forum is layered but has strong resonance with Peter Robinson’s advice that when a problem cannot be solved it needs to be enlarged. A year or so ago he argued that in such intractable circumstances there is a need to broaden the agenda and open up more scope for trade-offs and hopefully the inclusion of other issues upon which common ground might be found.

Robinson recognised that Brexit enlarged the problem but sensibly noted that engagement to solve those problems is unlikely to happen until there is greater clarity as to what kind of Brexit confronts us. That clarity should reveal itself in the very near future. Robinson was careful not to bolt the horses, so his words were measured and careful. He didn’t propose an agenda other than suggesting that the border poll should be generational – happening every seven years.

What Robinson didn’t tell us was who was best placed to instigate and formulate the discussions. He identified that Stormont was neither the place nor the ambience – it would put too much of a burden on an already fragile process. Neither did he tell us how to get the unionist political parties into the room. In all the initiatives in the last 50 years to construct settlements and peace, the most difficult and the most transformative step was to get unionism into the room. The Apprentice Boys took a time before entering the Derry room.

Unionism in the room

The core conversation in the coming months should be about those two issues: who sets up the talks and how unionism is persuaded to enter the room. If those two issues can find favour, then all the issues that now seem so intractable and negative can become less volatile and destructive. It would be a gateway to allow the parties here to resurrect the Executive and the Assembly. It would be beyond bizarre for dissident republicans or Loyalist paramilitaries to continue their violence when the future of this island was being addressed by the main protagonists. It gives a platform to address the ramifications of Brexit. It allows for a mature preparation for a border poll that is part of the Good Friday Agreement, but which contains as many negatives as positives.

The Taoiseach, Leo Varadkar, was correct to say that if there is a coming together sometime in the future then we will be looking at a “different state” and a “different constitution”. Nationalism, in its various manifestations, will enter the room with positivity but will have to be prepared to stretch itself in generosity and patience. The Apprentice Boys have read the signs of the times in their own city and have become a forerunner for the various manifestations of unionism. Peter Robinson astutely marked the cards for his own people. The present leaders of unionism have a responsibility to absorb what has already been signified and modelled by some of its own people and to show a modicum of courage by gently leading their constituency to the realisation that this is the best way to face into the future.