Free speech is not the same as freedom from consequences

Misrepresentation underpins complaints about an intolerance of conservative views 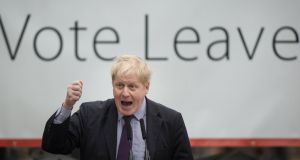 ‘The ‘£350 million for the NHS’ lie almost certainly swayed the outcome of the Brexit vote. That this figure was mendacious in the extreme proved no impediment to it becoming cemented in the public consciousness.’

The right to free discussion is a bedrock of western society, central to our societal well-being. But growing political polarisation on both sides of the Atlantic has seen a screed of articles bemoaning an intolerance of conservative or fringe views. If certain commentators are to be believed, the very Voltairean principle of free speech is itself under attack.

This vocal hand-wringing is, however, based largely on misrepresentation. The laudable aim of free speech is predicated on an implication of good faith and honest engagement. Once this assumption is violated, it becomes a Trojan horse for the most terrible falsehoods. Far from being an arbiter of truth, the adversarial nature of debate all too frequently rewards only the most devious orator, willing to employ inflammatory fictions.

The reality is that it takes far more effort to debunk nonsense than it takes to utter it in the first instance. To cite a contemporary example, the “£350 million for the NHS” lie almost certainly swayed outcome of the Brexit vote. That this figure was mendacious in the extreme proved no impediment to it becoming cemented in the public consciousness, nor did repeated debunking stop its principal architect becoming prime minister.

In reality, we are all vulnerable to the phenomenon of illusory truth, where repeated assertion makes us more likely to believe something due to repeated exposure. This can even sway us to accept fictions implicitly, despite knowing them to be wrong on an intellectual level. This quirk of human psychology has long been known to demagogues and dictators, calling to mind Joseph Goebbels’s infamous observation: “If you tell a lie big enough and keep repeating it, people will eventually come to believe it.” That our very understanding can be so profoundly hijacked is disconcerting and means we cannot naively afford an uncritical platform to those intent on deliberately misleading.

Nor can we allow the ideals of open discussion to be co-opted as a cover for oppression. There is no onus on us to engage with hateful philosophies, nor obligation to give a free airing to positions that seek to deny others of fundamental rights or basic humanity. Writing at the twilight of the second World War after fleeing Vienna to escape the rise of Nazism, philosopher Karl Popper noted that societies tolerant without limit will eventually be overtaken, subjugated by the those with no such compunction.

Having witnessed the triumph of the intolerant, Popper’s solution to this “paradox of tolerance” was the conclusion that “we should therefore claim, in the name of tolerance, the right not to tolerate the intolerant”. This is precisely the reason that there are regulations on hate speech, and laws against incitement to hatred, feeble as they might be.

More than this, freedom of speech should never be confused with freedom from consequence of speech. The former is, of course, sacrosanct; everyone has a right to their own views, however odious or erroneous they might be. However, the crucial caveat is that this right does not shield one from being judged on content of those views. One may, of course, espouse racist, homophobic, misogynistic or otherwise distasteful positions – and others have the right to judge them for it.

There is no automatic protection against opprobrium inherent in the right to free speech. Nor is anyone entitled by virtue of this right to a platform for their views. The mere fact that one can hold any view they desire does not automatically mean those views have to be respected – a nuance with which many decrying criticism of their views seem to struggle.

We should, of course, constantly seek to challenge our positions. Far from being static, our world view should constantly evolve as our information changes, and our understanding deepens. Nor should we ever shy away from open, honest discussion. But being tolerant of those with differing views does not mean affording mendacious positions or hateful falsehoods a veneer of respectability. Robust discussion is of paramount importance for a healthy society, yet in an era of virulent disinformation on everything from politics to medicine, a tolerance for poisonous fictions comes with a price tag we can no longer afford.

Dr David Robert Grimes is a Maddox prize-winning science writer. His first book, The Irrational Ape: Why Flawed Logic Puts Us All at Risk, and How Critical Thinking Can Save the World, will be published on September 5th