Breda O’Brien: Boris Johnson’s infidelity shows how some sexism gets a free pass 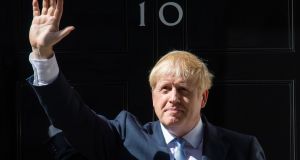 British prime minister Boris Johnson outside 10 Downing Street. Modern Britain is a society in deep trouble if Johnson’s pattern of serial infidelity is now the norm in the UK. Photograph: Dominic Lipinski/PA Wire

There is a curious aspect of the endless discussion about Boris Johnson. He has been called a liar, a buffoon, untrustworthy, narcissistic and many more things besides but one aspect of his new life as Britain’s prime minister has met with little other than approval.

He is moving into Downing Street with his current partner, Carrie Symonds, even though divorce proceedings with his wife, Marina Wheeler, have not concluded. The general media consensus is that this is a good thing because it reflects the reality of modern Britain.

Modern Britain is a society in deep trouble if Johnson’s pattern of serial infidelity is now the norm in the UK. This is a man who seems incapable of answering a straight question about how many children he has.

People who write in protracted detail about Johnson’s other flaws now seem to feel that it would be judgmental to even raise an eyebrow about his current living arrangements.

This was not always the case. British politicians until very recent times have always faced a degree of salacious interest in their sexual lives that was almost unhealthy. They were often sacked for affairs that the Irish media would have studiously ignored.

The Irish media have usually not covered sexual misbehaviour unless it impacts on the job a politician is supposed to be doing. That is not hypocritical. The distinction is important.

Even when Johnson’s colourful (a favourite euphemism of the media) personal life has been covered, the implications of his behaviour have often been glossed over in a way that could only be described as sexist.

In 2004, Johnson got sacked from the Tory shadow front bench by Michael Howard for lurid stories concerning his alleged four-year affair with Petronella Wyatt while married to Marina Wheeler.

This led Gaby Hinsliff, then chief political correspondent of the Observer, to write that the episode had brought an end to “an unlikely but uniquely engaging political career”.

Bet she often laughs wryly about that summation. But she was right. It should have been the end of him.

At the time, Howard was at pains to point out that the firing was not about personal morality but because Johnson had lied to two newspapers and to him.

But of course, cheating on your wife inevitably involves lying and generally untrustworthy behaviour. That may be uncharacteristic of someone or it may be part of a pattern. In Johnson’s case, it is clearly the latter.

The same sexism that causes people to act as if terrible treatment of women by powerful people is less relevant than attempts to conceal it also shapes the way we talk about women in power or close to it.

Symonds seems to be a tough, professional young woman who has played a major role in Johnson’s successful bid to be prime minister. But that does not render her immune from sexism.

More attention is paid to what Symonds wears than to what she thinks. This is part of a pattern where women are seen as more akin to retail display mannequins than real people.

She has strong views and may have a large influence on Johnson’s policies.  But people were much more interested in wittering on about the dress she chose to wear while standing meekly to the side as Johnson made his first speech as prime minister.

According to people who care about these things, she channelled Kate Middleton’s preferred style and of course, every woman who wears roughly the same things must be aiming to project roughly the same personality.

Every detail of what she wears will be scrutinised from now on. Women in the public eye, whether as partners or as politicians, all get the same treatment.

David Cameron’s wife, Samantha, after her husband left office, started designing and selling the kind of frocks she would like to have had access to when acting as the prime minister’s wife.

She has said that one of the features of her dresses is that they allow women to exit cars in a way that protects them from photographers who are trying to get a photo up their skirts.

Moving Symonds into Downing Street is just part of Johnson’s general contempt for societal conventions when they interfere with his plans for domination.

Nor is the key issue whether they are married or not. Johnson has amply demonstrated already his contempt for marriage by his behaviour when married.

Symonds is a grown-up and can make her own choices. Nor would it probably add greatly to the stability of their volatile relationship if Johnson followed the example of Donald Trump and married for the third time.

However, Johnson’s liberal defenders are making exactly the same mistake as they accuse conservative Trump supporters of making.

To pretend that serial infidelity is all just terribly modern is just a terribly modern form of sexism because the implication is that the way that you treat women could not possibly demonstrate anything about a person’s fitness for high office.

1 Cabinet to decide on Friday if curbs on travel to be lifted a month early
2 Six counties free of new cases of Covid-19 over past week
3 Normal People Class of 2020: The nine college friends in the series
4 Gardaí disperse crowds gathered at coastal beauty spots
5 How lockdown has helped us to save money - and find new ways to spend it
Real news has value SUBSCRIBE