Una Mullally: Tech sector is not being held to account for its nonsense 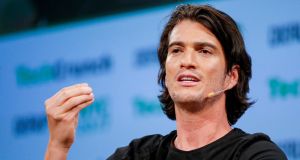 WeWork chief executive Adam Neumann: a visionary, an operator and an innovator, as well as a community and culture creator, according to the office-rental company. Photograph: Eduardo Munoz/Reuters

‘The great enemy of clear language is insincerity. When there is a gap between one’s real and one’s declared aims, one turns as it were instinctively to long words and exhausted idioms, like a cuttlefish spurting out ink.” It’s 73 years since George Orwell’s essay Politics and the English Language was published, and it’s a piece of writing that remains a refuge. I retreated to it again last week, upon reading some of the preparatory paperwork the company WeWork – apologies, the We Company – filed ahead of their initial public offering (IPO).

For the uninitiated, or perhaps the unindoctrinated, WeWork is a real-estate company – primarily office rental – in tech-company fancy dress. It has a large presence in Dublin where its offices are rented out to freelances, start-ups and other larger companies who don’t want the hassle of having to find and fit out offices themselves. “We dedicate this to the energy of we,” the S-1 paperwork begins, “greater than any one of us, but inside all of us.”

What WeWork does is actually very pedestrian. It rents office space. But that’s not enough in these hyperbolic days. One has to be on a mission to evolve the world’s consciousness. And it has worked for WeWork, so far. By wrapping itself in the cape of spoofery, it has managed to excel beyond the humble task of signing leases. Like all wheezes, as long as you do something you can’t fully describe, it appears possible to keep bobbing along.

What is heartening is that tech journalists have begun to call WeWork’s bluff. “WeWork isn’t a tech company; it’s a soap opera,” a report in the Verge read when that paperwork was filed. Profile pieces abound about chief executive Adam Neumann’s ego and bizarre grandiosity, oh, and the fact that he cashed out WeWork stock to the tune of $700 million by mid-July, which isn’t the greatest vote of confidence in an upcoming IPO. Perhaps even he has doubts in the company’s valuation?

Let’s talk about valuations. WeWork lost $700 million in the first half of 2019. The company lost nearly $2 billion in 2018. Yet, like so many other companies that claim to be innovative and disruptive and change-making, it is allowed to trundle along in a way that companies in non-spoof industries would never be permitted. WeWork may make things easier for freelances to hot desk, and also simplify the hunt for a company office. It’s a good business idea, but its pace of expansion and its addiction to word salad in an attempt to inflate its stature through hyperbole are, to put it mildly, cause for concern.

What will happen to WeWork when the inevitable global economic downturn comes? WeWork has $47 billion in lease commitments and $6 billion of debt. John Arenas, chief executive of Serendipity Labs, said last week that WeWork would need to make $94 billion in revenue to get a 30 per cent profit. It has $4 billion in committed revenue.

A private office at the upcoming Central Plaza development on Dame Street – the site of the old Central Bank, where WeWork’s offices for rent will span nine floors – rents for €3,150 a month. WeWork has a seven-floor building near the Grand Canal in Dublin called Charlemont Exchange, six floors in a building on North Wall Quay, five floors at Iveagh Court on Harcourt Road. WeWork is the largest private office tenant in Manhattan, and the largest office tenant in central London. It is apparently one of the most valuable private companies in the world, yet has never turned a profit.

The language of advertising, marketing, public relations and spin has chiselled away at us for years, before the tech sector flooded forth, smoothing over any remaining bumps until meaning slid from words like snakes shedding their skin. But WeWork has reached another level. “Adam is a unique leader who has proven he can simultaneously wear the hats of visionary, operator and innovator, while thriving as a community and culture creator,” last week’s WeWork paperwork declared.

Anyone can say anyone simultaneously wears the hats of visionary, operator and innovator, but that doesn’t actually mean anything. It is truly remarkable how so many people (investors, media, employees, politicians, tech overlord wannabes) can be duped by the nonsense embedded in so much of the language used by the tech sector and broader “start-up” culture that borrows from that tech aesthetic. The confluence of aspirational delusion, wellness culture, new-age vocabulary, Utopian positivity, egomania, marketing blurb drivel and faux-woke dirge all conspire to not just debase language but also to perpetuate a nebulousness that points more towards smoke and mirrors than solid, smart ideas.

The debasement of language is a tool of the political practices of the day. Whether it’s used to remove empathy and incite violence, as Donald Trump’s crude, childlike, discombobulated ranting does, or whether it’s used to confuse and divert, as the anodyne evolution of vacuous marketing language that tech is so enthralled to does, language serves a tonal purpose beyond semantics. Back to Orwell: “This invasion of one’s mind by ready-made phrases,” he wrote, “can only be prevented if one is constantly on guard against them, and every such phrase anaesthetises a portion of one’s brain.”