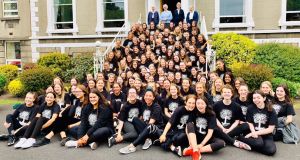 Sixth year students at Muckross Park College on their last day of school alongside nuns: The convent is irreplaceable. Photograph: Carl O’Brien

In an increasingly secular Ireland, the closure of a convent might be viewed as being of no particular import. Yet for the thousands of people who have been touched by the religious community living there, it is a time of shock and dismay.

A convent has a hidden life. A filmmaker might depict it by glowing skeins of lives weaving and interweaving through its doors: neighbours, friends, ancillary staff, teachers, pupils, past pupils, some of them with their children and grandchildren – all invisibly linked to a small community of women.

And now the links are ruptured and scattered, just when the women at the centre most needed their support themselves.

Carl O’Brien did an excellent job of describing what might be termed the public life of the Dominican Convent at Muckross Park. Everything that he wrote about the trailblazing women was true. Educators par excellence, humane, liberal in the best sense and, with all the flaws and idiosyncrasies you would expect in a group of strong-minded women with a mission, the sisters saw no reason why the girls they taught should not take on the world.

When it was first set up in 1900, Muckross catered for first-, second- and third-level students. Young women who wanted to earn degrees could not attend lectures, so the nuns set up lectures for them. The third-level students had a degree of freedom unheard of at the time.

The junior school took boys up until first class, which lead to many a man boasting that he was a past pupil of Muckross, including, rather improbably, Conor Cruise O’Brien. The house which became the convent and school had been bought from Joseph Mary Plunkett’s grandmother and names such as Plunkett, Dillon, O’Brolchain and de Valera remained entwined for generations with the school.

The convent in Muckross is irreplaceable, not least to this writer. Sr Norah O’Connor, then the principal and now the school chaplain, gave me my first real job, one I still hold. I could not have asked for a better first boss. The dark side of religious life has been well-documented, and rightly so. But we are in danger of losing the other side of the story.

For many of us growing up in 1970s Ireland, the fact that religious sisters were managers of hospitals and schools sent a powerful, subliminal message that women could be educated, strong and competent.

I remember experiencing the yawning gulf of a generation gap once while standing as part of a guard of honour after the funeral of Sr Meabh Ni Chleirigh (Vincenzo) who had been a polymath whirlwind of energy. I asked a younger colleague what was her impression of religious sisters and she replied, “Cute”. She did not mean cute as in sly, self-serving intelligence but cute as in adorable. I nearly fell over.

Some are women of tremendous warmth, like Sr Brenda Mary, much loved by her junior school pupils. Some were impressively educated for women of their time, like Sr Francis who taught physics and science. Sr Carmel went on after a career in the school to advocate for social justice. Sr Lua pours her considerable creativity into the beautiful, fruitful, walled garden and her work as custodian of the chapel. Sr Rita was an indefatigable champion of underdog pupils and under-confident teachers. Sr Barnabas’ brain should have been donated to science, such was her ability to keep track of and care about hundreds, if not thousands of past pupils. For these – and others that space does not permit me to mention – smart, accomplished, single-minded, kind, formidable, eccentric and occasionally cranky, were all words that I might have used. But cute? Never.

Their greatest contribution, though, was not in the area of role models for conventional success. These talented women silently witnessed to higher ideals by choosing neither to make money nor to found families but to give their lives to prayer and service.  Their prayers were an inexpressible source of comfort to many.

Knowing that your name was on the list of intentions outside the prayer room gave hope to seemingly hopeless cases.

Over the years, there were many tragic deaths of parents, siblings and even pupils in the school.

Young women with tear-stained faces stumbled over to the chapel, to be enveloped there by the soothing warmth of the sisters. Generations of young women began the next phase of their lives after a blessing from the sisters in that same chapel. No more.

Those of us seeking alternative care for older relatives would try to keep them in the same area and together with those they love. The fact that the sisters are too stoic and loyal to ever do anything except to take up their cross and carry on, should not lead anyone to minimise the sacrifice involved in being scattered to other convents so late in life and so far from lifelong companions.

It may be some small comfort to know that the light of veritas (truth – the Dominican motto) that they lit in hearts, minds and souls shines in places all over the globe. They are irreplaceable but their legacy lives on.