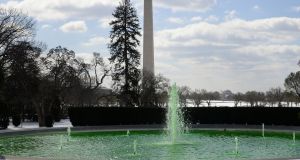 The annual St Patrick’s Day parade in Washington DC has been cancelled due to a “precarious financial position” partly created by heightened security requirements connected to such large public events.

In a statement on its website, the St Patrick’s Parade committee of Washington, DC said it was “distraught to announce that the 2019 St Patrick’s parade is cancelled”.

“After the 2016 tragedy in Nice, France, the government of the District of Columbia has significantly increased preventative security requirements for public gatherings such as the St Patrick’s parade. The corresponding rapid increase in overhead, in combination with relatively stagnant funding, have put the committee in a precarious financial position,” it said.

Some 84 people were killed and 300 injured in Nice on July 14th 2016 when a man drove a truck into a crowd on the Promenade des Anglais.

The Washington committee said certain expenses for the parade were offset by a grant from the government of the District of Columbia.

“We have relied on this grant support for many years, but as costs have increased, recently the grant has not had the same effect in reducing our financial burden. This reality and the committee’s steadfast commitment to holding the St Patrick’s Parade of Washington, DC in 2020, its 50th year, have led us to the very difficult but necessary decision to cancel the 2019 St Patrick’s parade,” it added.

The committee said it was an “all-volunteer non-profit organisation” that existed solely for the purpose of raising funds for and producing the parade in the US capital.

“Members of the committee proudly carry the torch of the original committee members who conceived of such a parade at a local watering hole in the late 1960s and produced the first-ever St Patrick’s parade in Washington in 1971.”

The committee said each parade was planned well in advance and included multiple meetings with neighbourhood advisors, the National Park Service, and the mayor’s special events task force, among others.

“The greatest overhead in producing an event of this magnitude is the government-related expense of security and street closures,” it said.

Fundraising events for the 2020 parade will not be impacted by the decision, the committee added.

It said it had been in contact with its counterparts at the Baltimore and Annapolis St Patrick’s Day parades and encouraged people to consider attending, entering, or otherwise participating in those on March 10th.

The first St Patrick’s Day Parade in Washington DC was held in 1971 and travelled along Massachusetts Avenue from Dupont Circle to the statue of Robert Emmet.