May insists MPs will vote on her Brexit deal next week, although dozens of Conservatives have promised to vote against it 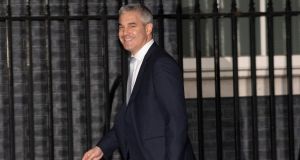 MPs at Westminster will seek on Tuesday to block a no-deal Brexit by threatening to restrict the government’s taxation powers if Britain leaves the European Union without an agreement. Labour is expected to back the amendment to the finance bill, which has the support of enough Conservatives to defeat Theresa May’s government, if the speaker selects it for debate.

“The amendment would mean that if the government wanted to use some of the specific powers in the finance bill to implement no deal it would have to give parliament a vote first or apply to extend article 50.

“The amendment doesn’t affect the normal operations of the treasury and government. But it does make it harder for the government to drift into no deal without parliament being able to direct it,” said Labour’s Yvette Cooper, who tabled the amendment.

The amendment marks the start of a cross-party parliamentary guerrilla campaign designed to demonstrate the majority against a no-deal Brexit, with other bills likely to be targeted with similar amendments.

It comes as Downing Street insisted that MPs would vote on the prime minister’s Brexit deal next week, although dozens of Conservatives have promised to join the opposition in voting against it.

Culture minister Margot James said on Monday that Britain could seek to extend the article 50 negotiating period beyond the end of March if MPs reject the deal.

Mrs May has told the House of Commons on more than 70 occasions that Britain will leave the EU on March 29th this year. However, Brexit secretary Stephen Barclay stopped short of ruling out a delay when he appeared before MPs on Monday.

“It is not a unilateral decision as to whether we extend article 50. That would require the consent of the other 27 member states. That would also raise all sorts of practical issues, not least the timing of the European parliamentary elections at the end of May. It is this government’s firm intention not to extend article 50 and to leave the European Union as the prime minister has set out,” he said.

Mr Barclay was responding to an urgent question on the Brexit negotiations from Labour leader Jeremy Corbyn, who said Mrs May was too busy promoting “project fear” to come to the house herself.

“The government is trying to run down the clock in an attempt to blackmail this house, and the country, into supporting a botched deal. [May] has refused to work with the majority in the last few months in a desperate attempt to spark life into what is actually a Frankenstein’s monster of a deal. We are now told if we don’t support it the government is prepared to push our whole economy off a cliff edge,” he said.

1 Ireland’s official coronavirus death toll likely to have been overstated, report finds
2 Bobby Storey: The IRA's planner and enforcer who stayed in the shadows
3 The abrupt end to Brexit talks is not only surprising but perplexing
4 Armed gardaí called as men with machete attack cars belonging to soccer team
5 Dublin city centre streets to be closed to weekend traffic
Real news has value SUBSCRIBE