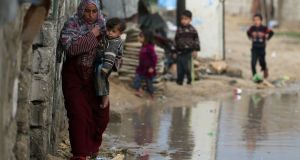 A Palestinian woman and her child in Khan Younis in the southern Gaza Strip on December 30th. Photograph: Ibraheem Abu Mustafa/Reuters

UNRWA’s existence was threatened last year when the Trump administration cut by $300 million Washington’s pledged contribution of $364 million and ended all future contributions, which cut the agency’s budget by one third. This was the largest reduction in funding in the agency’s 68-year history.

The US move came at a time when UNRWA already had a budget shortfall of $146 million, and put at risk essential services, including food, education and health.

Faced with a disastrous deficit of $346 million, UNRWA head Pierre Krähenbühl, his staff, and EU and Gulf supporters made up for the sum cut by the US and reduced the deficit to $21 million. Now Krähenbühl faces the herculean task of raising the money to keep the agency afloat for another year and repair damage to UNRWA facilities in Syria.

Since the US has also cut $200 million in development assistance to the Israeli-occupied Palestinian territories, UNRWA has become a vital resource for the West Bank’s 775,000 refugees (26 per cent of the population) and Gaza’s 1.3 million refugees (66 per cent). The situation in Gaza, where unemployment is at 41 per cent, has deteriorated over the past decade due to the Israeli siege and blockade, UNRWA reports, leaving 80 per cent of the people dependent on foreign assistance, including food aid.

UNRWA has continued operations in Syria throughout the nearly eight-year war. The agency provides basic services to 438,000 registered Palestinian refugees remaining in the country, thousands of whom have been displaced from UNRWA “camps” which had grown into urban neighbourhoods.

UNRWA provides 418,000 refugees with food baskets and 400,000 with cash assistance, reducing the number of refugees living in extreme poverty from 90 to 74 per cent. However, due to the lack of funding, UNRWA has cut the sum and the frequency of cash distributions.

Since many UNRWA classrooms and health centres have been destroyed, the agency has to rebuild in order to provide education and care at a time Syria, struggling to reconstruct damaged infrastructure, cannot assume responsibility for Palestinians.

While UNRWA operates in 10 of Syria’s 12 camps, the Yarmouk camp near Damascus, freed from al-Qaeda and Islamic State (Isis) last April, and the camp in Deraa in the south remain in limbo. Yarmouk camp, the largest in Syria with 148,500 refugees, was abandoned by most inhabitants in December 2012 during a major battle.

The Action Group for Palestinians in Syria says that 3,911 Palestinians have died in war-related incidents through the end of 2018.