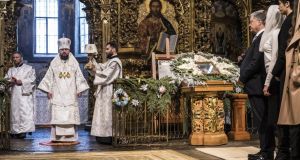 Ukrainian president Petro Poroshenko has urged the entire Orthodox world to recognise his country’s new church, as Russia’s spiritual leader denounced it as a western-backed political project resembling “the theatre of the absurd”.

As eastern Orthodox believers celebrated Christmas Day, hundreds of Ukrainians gathered at St Sophia’s cathedral in Kiev on Monday to see the so-called tomos of autocephaly, a decree that Patriarch Bartholomew of Constantinople signed at the weekend to establish the independence of Ukraine’s new church.

Bartholomew last October accepted Ukraine’s request to cancel more than 330 years of Russian control over its spiritual affairs, in a move that enraged Moscow and prompted it to sever ties with the Constantinople Patriarchate, which is traditionally “first among equals” in the Orthodox hierarchy.

Mr Poroshenko and many compatriots hail the creation of the church as a victory in their country’s multifaceted conflict with Russia, but it has angered those Ukrainians who follow the Moscow Patriarchate branch of the Orthodox church and prompted warnings of bloodshed from Russian politicians and clerics.

“We have finally freed from Russian captivity our ancient church, whose history goes back to [10th-century] Prince Volodymyr. We have broken the last fetters that bound us to Russia and its fantasies of Ukraine as canonical territory of the Russian Orthodox Church, ” Mr Poroshenko said at St Sophia’s cathedral.

“We call on all the world’s Orthodox churches to recognise it and pray for it as the ‘holy church of Ukraine’ with the historic city of Kiev as its seat,” he added.

“More than once we have seen that nothing is impossible for us when we are united . . . Victory will also come, and peace will come. And Ukraine – as a successful, wealthy, happy country, will become a member of the European Union and Nato. ”

Critics at home and abroad accuse Mr Poroshenko of using religion to try to boost his dismal ratings before a presidential election in March.

Russia insists that the Moscow Patriarchate in Ukraine is the country’s only true canonical church, and warns that violence could erupt over control of monasteries and other ecclesiastical property.

Patriarch Kirill, the leader of the Russian Orthodox Church and a strong supporter of Russian president Vladimir Putin, dismissed Ukraine’s new church as an illegitimate union of “schismatics”.

“We see a president of Ukraine who chairs a church council, who decides who will lead the local church. And who meddles so crudely in church life, without being embarrassed to do so publicly, that it all simply turns into theatre of the absurd.”

Kirill appeared to be referring to a church unification council in Kiev last month, attended by Mr Poroshenko, at which clerics chose Metropolitan Epifaniy to lead the new church.

In his Christmas sermon in St Sophia’s, Epifaniy urged Ukrainians to “put aside past confrontations, rejections and enmity, because only by forgiving each other can we truly establish a unified . . . Ukrainian Orthodox Church. ”