Backstop assurances unlikely to tilt odds in favour of May 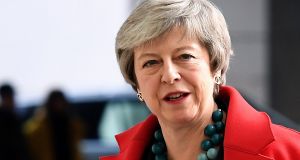 British prime minister Theresa May remains convinced that the DUP’s 10 MPs are the key to unlocking the support of Conservative Brexiteers for her deal. Photograph: Andy Rain/EPA

The Taoiseach’s confirmation that Britain can expect further written assurances on the Northern Ireland backstop will be welcome in Downing Street, as Theresa May’s Brexit deal faces almost certain defeat in the House of Commons next week. The prime minister, who hosted some Conservative MPs for drinks at No 10 on Monday evening, has promised domestic reassurances alongside those from Brussels.

Mrs May remains convinced that the Democratic Unionist Party’s 10 MPs are the key to unlocking the support of Conservative Brexiteers for her deal. But the DUP demands legally-binding changes to the border backstop that would make it time-limited or give Britain a unilateral exit mechanism. The party also wants the Northern Ireland Assembly to have a veto over any further regulatory alignment with the European Union after Brexit.

None of these demands is acceptable to the EU, which is adamant that the text of the withdrawal agreement cannot be reopened and that clarifications on the backstop cannot contradict its definition in the agreement. The EU is also queasy about the prospect of what one senior official described as “a conveyer belt of concessions” without a cast-iron guarantee that they would win a majority for the deal in parliament.

The expectation at Westminster is that, if the deal is rejected next week, Mrs May will return to Brussels to seek further concessions as the March 29th deadline draws closer. One option is to craft an amendment that outlines the concessions needed from the EU and to win a majority for that before going back to Brussels.

The prime minister’s room for manoeuvre has increased, partly because after last month’s confidence vote her leadership cannot be challenged until next December. The case for her Brexit deal grows stronger as other options such as Canada-plus and Norway-plus fall away because of lack of time and support.

MPs will seek on Tuesday to demonstrate that a majority opposes a no-deal Brexit, which is now the favoured option for hardline Brexiteers. Brexiteers who want no deal and the Remainers who want a second referendum both believe they can achieve their goal by remaining implacable in opposition to the prime minister’s deal.

In this atmosphere, written assurances on the backstop are unlikely to be robust enough to persuade many of May’s critics in her own party to change their minds about the deal. But as the cliff edge approaches, the prime minister’s argument that her deal delivers Brexit with minimum disruption could become more persuasive.