Varadkar on Brexit: We don’t want to trap the UK 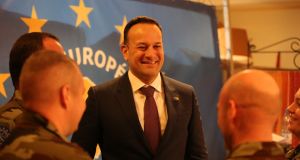 Taoiseach Leo Varadkar meets Irish troops in Mali during his visit to Africa.

The European Union is willing to give fresh, written assurances about the nature of the Northern Ireland backstop ahead of next week’s key vote at Westminster on the Brexit deal, Taoiseach Leo Varadkar has said.

Speaking in Mali during a visit to Defence Forces personnel, Mr Varadkar said that EU leaders had already given Theresa May assurances that they did not wish to trap Britain in the backstop indefinitely.

“The [European] Council conclusions at our last meeting in December provided written assurances but certainly what’s happening at the moment is there is close contact between the UK and EU institutions on whether a further set of written guarantees explanations and assurances could make a difference. And bear in mind a lot of the opposition to the withdrawal agreement and the backstop might be based on suppositions and misunderstandings about our intent as a European Union,” he said.

“We don’t want to trap the UK into anything – we want to get on to the talks about the future relationship right away. I think it’s those kind of assurances we are happy to give.”

MPs will resume their debate on the Brexit deal on Wednesday and Mrs May said on Monday that she would set out in the coming days what assurances her government could give domestically on the backstop as well as those from the EU.

“So we will be setting out measures which will be specific to Northern Ireland, we will be setting out proposals for a greater role for parliament as we move into the next stage of the negotiation and we are continuing to work on further assurances on further undertakings from the European Union in relation to the concern that has been expressed by parliamentarians,” she said.

Surely now is the time in Westminster for everyone, in government and in opposition, to cast aside unrealistic options

More than 100 Conservative MPs have indicated that they will join the opposition in voting against the deal and the DUP’s 10 MPs have insisted that there must be legally binding changes to the nature of the backstop.

British negotiators have pressed in recent days for the EU to promise to negotiate a post-Brexit trade deal by 2021, a demand that is unacceptable to the remaining 27 member states.

Downing Street said on Monday that the vote on the Brexit deal would go ahead next week, despite the expectation at Westminster that it will be defeated.

In a speech to Ireland’s ambassadors on Tuesday, Tánaiste Simon Coveney will warn that the time for “wishful thinking” is over if Britain is to avoid crashing out of the EU without a deal.

“Surely now is the time in Westminster for everyone, in government and in opposition, to cast aside unrealistic options based on promises that simply cannot be delivered,” he is expected to say.

“If that doesn’t happen quickly, in the absence of that realism, it is the hardliners who think no price is too high to pay for their version of Brexit who will win out to everyone’s cost, including Ireland’s.”