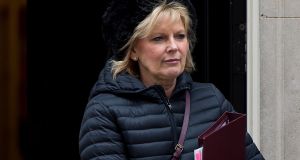 Anna Soubr criticised the lack of police response after chants of “Soubry is a Nazi” could clearly be heard during an interview with BBC News. Photograph: Ben Pruchnie/Getty Images

The speaker of the British House of Commons, John Bercow, has urged police to do more to protect MPs outside parliament from abusive protesters after they repeatedly shouted at Conservative MP Anna Soubry that she was a “Nazi” as she spoke on live TV.

Ms Soubry also criticised the lack of police response after chants of “Soubry is a Nazi” could clearly be heard during an interview with BBC News on Abingdon Green, a grassed area outside parliament used by broadcasters.

It is the second time in recent weeks the pro-remain MP has been targeted by a small group of pro-Brexit protesters wearing yellow vests, some of whom have links to the far right. On the earlier occasion she was surrounded by the shouting men, who called her a traitor.

After the latest incident, the Conservative MP Nick Boles raised the issue with Mr Bercow in the Commons, asking what could be done to end the harassment.

The Speaker said that while safety off the parliamentary estate was not part of his remit, he took the issue very seriously and had been in touch with police, “who have been made very well aware of our concerns”.

Mr Bercow told MPs: “Peaceful protest is a vital democratic freedom, but so is the right of elected members to go about their business without being threatened or abused, and that includes access to and from the media stands in Abingdon Green.

“I am concerned at this stage about what seem to be a pattern of protest targeted in particular - I don’t say exclusively - at women.”

He was backed by other MPs, among them Labour’s Mary Creagh, who said such “vile, misogynist thuggery, abuse and harassment” raised particular worries following the murder of her colleague Jo Cox in 2016 by a far-right terrorist.

During the BBC interview, Soubry broke off from answering questions to tell the presenter Simon McCoy: “ I do object to being called a Nazi actually. I’m sorry but I just think this is astonishing.”

The abuse continued as Ms Soubry was interviewed by the Sky News presenter Kay Burley, with chants of “Liar, liar” heard throughout the live broadcast.

She added: “I’m told that we should get used to it, but we shouldn’t have to. Apparently it’s democracy in action and the CPS [Crown Prosecution Service] believe that no offences are being committed”.

In a later tweet, Ms Soubry said: “Apparently MPs and politicians are meant to accept it as part of the democratic process. I fail to see why journalists and technicians should be subjected to the same abuse & intimidation as the police stand by and do nothing. They tried to stop me getting into Parliament.”

The political commentator Owen Jones was accosted by a group outside parliament earlier on Monday, with some wearing Union flags. He shared a video of his encounter on Twitter, where they could be heard calling him a “traitor” a “horrible little man” and accusing him of writing “fake news”.

Many of the incidents have been carried out by the same small group of protesters wearing yellow high-vis jackets, modelled on the French gilets jaunes movements, who like to live stream their actions on Facebook.

They have also blocked Westminster Bridge and harassed other politicians and journalists, including shouting racist and sexist abuse at a Sky News team.

A key member of the group is a man called James Goddard, who identified himself as the person filming the first abuse of Mr Soubry. Mr Goddard is a supporter of the far-right activist Tommy Robinson, and has posted anti-Muslim messages on the social media site Gab, which is popular with far-right users.

The Metropolitan police have been contacted for comment.– Guardian News and Media 2019