Trump to address nation as impasse over border wall continues 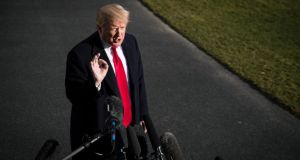 US president Donald Trump said he would speak to the nation about the “humanitarian and national security crisis” on the southern border on Tuesday at 9pm. Photograph: Sarah Silbiger/New York Times

US president Donald Trump will deliver a prime-time television address on Tuesday evening on the issue of border security as the impasse over funding for his proposed border wall continues.

As the government shutdown entered its third week on Monday, Mr Trump announced that he would speak to the nation about the “humanitarian and national security crisis” on the southern border on Tuesday at 9pm.

The president will also visit the border on Thursday, the White House confirmed, as controversy over Mr Trump’s demand for $5.7 billion in funding for his proposed border wall continued.

Press secretary Sarah Huckabee Sanders said the president would “meet with those on the front lines of the national security and humanitarian crisis” on Thursday, with further details due to be announced in the coming days.

The US government has been in partial shutdown since December 22nd, after Congress failed to reach agreement on extending a set of spending bills, with the main disagreement centred on funding for Mr Trump’s proposed border wall. Nine of 15 government departments have been affected by the shutdown.

Mr Trump’s request for a prime-time slot to address the nation is unusual, and is typically reserved for moments of national crisis. It was not yet clear which networks would cover the broadcast, though cable news channels CNN and Fox confirmed they would carry the address.

Mr Trump’s talk of a “national security crisis” prompted speculation that he could declare a national emergency. On Sunday he told reporters: “We have a national emergency – just read the papers. We have a crisis at the border of drugs, of human beings being trafficked all over the world. They’re coming through. And we have an absolute crisis, and of criminals and gang members coming through.”

The president doubled down on this threat on Monday in a tweet when he referenced Democratic congressman Adam Smith’s comments on presidential power to declare a national emergency.

“Congressman Adam Smith, the new chairman of the House armed services committee, just stated: ‘Yes, there is a provision in law that says a president can declare an emergency. It’s been done a number of times.’ No doubt, but let’s get our deal done in Congress!”

But Mr Smith shot back at Mr Trump’s tweet, claiming that he had been quoted out of context. He said that while technically the president could invoke a national emergency, it was a “terrible idea”. “There is no national emergency,” he said, accusing Mr Trump of artificially creating a crisis. The Washington state congressman also accused Mr Trump of “changing course like a drunken sailor” on Syria and foreign policy. “The president makes it up as he goes along.”

Other members of Congress also questioned whether Mr Trump should invoke national emergency powers, though technically he would be within his rights to do so.

Despite negotiations over the weekend in Washington between congressional representatives and the White House there was little sign of a breakthrough on Monday.

This is despite the fact that Mr Trump appeared to change course on his demands for a border wall, suggesting on Sunday that he favoured a “steel border” rather than a concrete wall. Democrats “don’t like concrete,” he said, “so we’ll give them steel. Steel is fine . . . steel is actually more expensive than concrete, but it will look beautiful and it’s very strong. It’s actually stronger.”

Senate minority leader Chuck Schumer warned, however, that Democrats would not be bullied by the president.