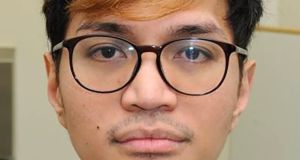 Indonesian student Reynhard Sinaga, who has been jailed for life for raping at least 48 men. Photograph: Greater Manchester Police 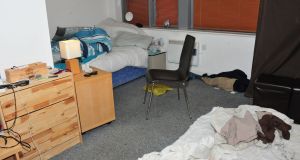 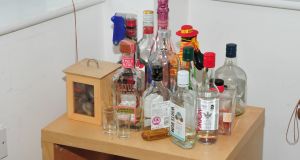 Bottles of alcohol which were used to spike victims in the home of Reynhard Sinaga Photograph: Greater Manchester Police/PA Wire

A man described as “Britain’s most prolific rapist” will never be safe to be released, a court has heard, as he was jailed for a minimum of 30 years after being found guilty of raping or sexually assaulting 48 young men in Manchester.

Reynhard Sinaga (36) , a mature student from Indonesia, is thought by police to have abused at least 195 men over two-and-a-half years after luring them to his flat under the guise of being a “good samaritan”, drugging his victims and then attacking them after they passed out.

He was proved to have committed 159 offences, including 136 rapes, which he filmed on two mobile phones. Police have yet to identify at least 70 of his victims.

On Monday, Sinaga was sentenced to life in prison with a minimum term of 30 years, bringing a two-year media blackout to an end at the conclusion of his fourth trial.

Sinaga is already serving 88 concurrent life sentences with a minimum of 20 years before he can be considered for parole following his first two trials, which related to 25 victims and were heard between 2018 and last year. He was sentenced on Monday for trials three and four, where he was convicted of counts relating to a further 23 victims. All but four of the 48 victims whose cases came to court were raped.

Sentencing him at Manchester crown court on Monday, Judge Suzanne Goddard QC described Sinaga as a “dangerous, deeply disturbed and perverted individual with no sense of reality” who should never be released from prison.

The judge said she had strongly considered ordering Sinaga to serve a whole life term, meaning he would never be released, which would have been the first such sentence imposed for a crime other than murder.

Goddard said it was a “borderline case”, therefore she could only pass a term for a minimum of 30 years but added: “In my judgment you are a highly dangerous, cunning and deceitful individual who will never be safe to be released, but that is a matter for the Parole Board.”

The defendant, who wore a knitted sweatshirt and black-rimmed glasses, smirked as he entered the dock beside two custody officers but appeared expressionless and bored for much of the sentencing. He yawned and played with his hair as harrowing evidence of the impact on his victims was read to a packed courtroom.

Addressing Sinaga, Goddard said he had shown “not one jot of remorse” and told him: “Again, you seem to be actively enjoying the court process even as you stand there waiting to be sentenced.”

She added: “You are an evil serial sexual offender who preyed on young men who came into the city centre wanting nothing more than a good night with their friends.

“One of the victims in their victim personal statement described you as a monster. The scale and enormity of your offending establishes that is an accurate description.

“Rarely if ever have the courts seen such a campaign of rape covering so many victims over such a prolonged period.”

Sinaga claimed his victims were enjoying acting out his sexual fantasy of playing dead during intercourse, but the defence was described as “ludicrous” and unanimously rejected by the four trial juries at Manchester crown court.

Many of the men could be heard on film snoring while he raped them. One man told the court he showed Sinaga a scan of his unborn child before he fell unconscious, dismissing the idea that he would have consented to what Sinaga claimed was “Fifty Shades of Grey-type stuff”.

Sinaga, who moved to the UK in 2007 at the age of 24, mostly preyed on undergraduates in their late teens or early 20s. They had typically gone into Manchester city centre “wanting nothing more than a good night out with their friends”, said the judge, Suzanne Goddard QC.

The court heard Sinaga had a tried-and-tested formula for finding his victims outside clubs within a few minutes’ walk of his flat on Princess Street in central Manchester.

He would go out after midnight to wait outside clubs, usually Factory or Fifth, and prey on mostly heterosexual young men who had been kicked out by bouncers or lost their friends or partners. Some had no money for a cab home or their phone batteries had run out, while others had been sick.

All were in a state of inebriation when they were approached by the slight, smiling man in black-rimmed glasses, who appeared harmless. When he asked the men if they wanted to come back to his flat and sleep on the floor or have a few more drinks, they agreed.

A CCTV still of Sinaga leaving his flat in Manchester, from which he typically ventured after midnight in search of victims.

The juries were told Sinaga kept men’s belongings as trophies and looked them up on Facebook. He texted a friend to boast about one victim: “He was straight in 2014. 2015 is his breakthrough to the gay world hahaha.”

Police believe Sinaga would have carried on had one of his victims not woken up during an attack and called 999 on June 2nd, 2017.

Whenever groggy victims regained consciousness, Sinaga could be seen pushing them back to the floor to continue the assault or snatching away his phone to avoid suspicion. Few had any idea they had been raped until police knocked on their doors several years later.

Many months of excruciating analysis identified 195 victims, all of whom were unconscious when Sinaga abused them. Investigators never found the drugs he had used to knock his victims out.

The judge said Sinaga had showed ‘not one jot of remorse’ and seemed to be enjoying the court process before sentencing.

But experts told the jury they believed the men must have been drugged, probably with gamma-hydroxybutyric acid - known as GHB - or something with very similar effects. Even at quantities as low as 1ml, GHB can render a person unconscious.

Victims described how their careers and personal relationships had suffered as a result of the abuse. Several said they had turned to alcohol and become socially isolated, unable even to tell close relatives or friends about what happened.

One teenager described Sinaga as “an evil predator” and “faceless monster”, and said the day he was told by police that he had been raped “changed my life for ever”. He said he began drinking heavily and having panic attacks, and considered self-harm, abandoning a teaching course.

Another man, who had a promising career when he was attacked by Sinaga, said he would have killed himself were it not for his mother, one of the only family members or friends he had been able to tell what had happened.

Jurors had to watch hours of explicit footage recorded by Sinaga, who insisted throughout that all of the men were simply pretending to be asleep as part of what his barrister, Richard Littler QC, described as “a role-play fantasy”. The law states that an individual cannot consent to sex if they are unconscious, so the jury was required to assess only whether the men in the video were asleep.