Harvey Weinstein arrives at a Manhattan court for the start of his landmark trial on charges of rape, allegations that helped fuel the #MeToo movement. Video: Reuters 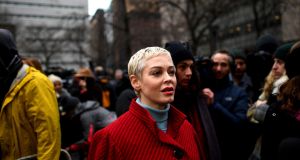 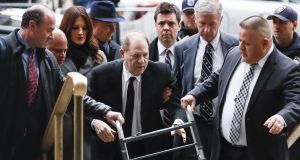 Weinstein was charged with raping one woman and sexually assaulting another in separate incidents over a two-day period in 2013, officials said on Monday. The felony charges include forcible rape, forcible oral copulation, sexual penetration by use of force and sexual battery by restraint.

Weinstein and his attorneys have repeatedly denied allegations of criminal behaviour, and a representative did not immediately respond to an inquiry about the California charges on Monday.

After the opening of his trial in New York, Weinstein’s lawyers had little to say to reporters about the news trickling in of an LA case. “We don’t know what is going to happen. We’re hoping not,” said Damon Cheronis, one of his attorneys.

“We believe the evidence will show that the defendant used his power and influence to gain access to his victims and then commit violent crimes against them,” Ms Lacey said in a statement.

Ms Lacey’s office created an entertainment industry sex crimes taskforce in the wake of the 2017 Weinstein scandal and the #MeToo reckoning in Hollywood.

If convicted, Weinstein faces up to 28 years in prison, prosecutors said. He is expected to be arraigned at a later date.

The news of an LA case came as Weinstein has pleaded not guilty to five counts in New York, including raping a woman in 2013 and forcing another woman to engage in oral sexual conduct in 2006. The most serious charge is predatory sexual assault, which carries a potential life sentence.

At the start of the New York trial, protesters including the actors Rose McGowan and Rosanna Arquette confronted Weinstein as he got out of his car. More than 80 women have accused Weinstein of sexual misconduct, including Gwyneth Paltrow and Ashley Judd.

In a civil case against Weinstein, more than 30 women recently secured a $25 million settlement, but the deal sparked intense backlash since Weinstein did not have to pay with his own money and did not have to admit guilt. A number of accusers involved in that case have pledged to dispute the settlement.

In LA, prosecutors were originally investigating accusations from eight people involving allegations of sexual battery or assault, four from the Los Angeles police department and four by Beverly Hills police, according to the LA Times.

The original investigative reporting on Weinstein was awarded the Pulitzer prize in 2018 and paved the way for women in industries across the globe to come forward with stories of sexual abuse. – Guardian