Turkey to vote on sending troops to defend Libyan government

Extraordinary session of parliament on Thursday to decide on controversial deployment 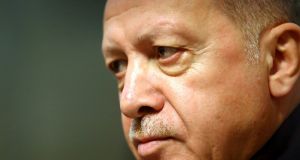 Turkey’s parliament is set to convene on Thursday in an extraordinary session to vote on a resolution to deploy troops in Libya for a year to defend the UN-recognised government in Tripoli. President Recep Tayyip Erdogan has argued that Turkey’s interests are under threat from the advance into Tripoli’s suburbs of rebel forces under Tobruk-based Gen Khalifa Haftar.

If Gen Haftar halts his offensive and withdraws his troops, Turkey may not dispatch troops to Libya, Turkish vice-president Fuat Oktay said on Wednesday.

The Arab League urged Libya’s warring sides not to “take any unilateral steps” that would lead to international intervention and escalate and prolong the conflict. The League warned against interventions that would facilitate “the transfer of foreign extremist fighters from other regional conflict zones to Libya”.

Turkey’s ruling Justice and Development and Nationalist Movement parties, which command a majority, back the measure while three opposition parties oppose it. The main opposition Republican People’s Party argued the deployment would plunge Turkey into a new conflict and said Ankara should “give priority to a diplomatic solution”.

The party’s deputy head, Unal Cavukoz, argued that Turkey, which is already involved in Syria’s civil and proxy warfare, should not become embroiled in Libya’s conflict.

Turkey has sent arms and drones to Tripoli in spite of a UN weapons embargo and has, according to the Britain-based Syrian Observatory for Human Rights, dispatched 300 Free Syrian Army surrogate militiamen to support the government of Fayez al-Sarraj, who leans toward the Muslim Brotherhood, which is allied to Turkey and is protected by fundamentalist militias.

Syrian opposition groups based in northwestern Idlib province, which are under attack from government forces, urge Turkey to send reinforcements to them rather than to Tripoli.

Gen Haftar is supported by anti-Brotherhood Egypt, the Emirates, Russia, and Jordan.

France, which has armed Gen Haftar, hopes he can impose order on Libya’s chaos and crack down on jihadi groups which operate freely in areas where there is a political and security vacuum. Paris fears an influx of Libyan refugees if the war continues.

Mr Erdogan has used the promise of military forces as leverage on Mr Sarraj to agree to the delineation of their coastal economic zones to bisect the eastern Mediterranean, encroaching on the recognised zones of Greece and Cyprus, which seek to exploit the area’s vast natural gas reserves.

The Turkish-Libyan pact could also prevent Egypt and Israel from laying undersea pipelines to carry gas to southern Europe.