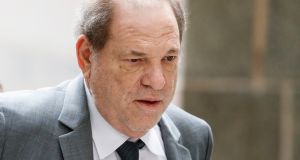 The lack of personal accountability for former movie producer Harveyn Weinstein has caused expressions of disappointment and anger from several of the women involved. Photograph: Justin Lane/EPA

More than 30 women who were allegedly subjected to sexual misconduct by the disgraced Hollywood mogul Harvey Weinstein have reportedly reached a $25 million (€22 million) settlement which, if approved, would bring to an end most of the civil lawsuits pending against him.

Weinstein’s numerous alleged victims in the US, Canada, Britain and Ireland. The proposal is awaiting final approval from the courts and from individuals involved, the newspaper says, but once those last hurdles are cleared payouts would be made by insurance companies handling the bankruptcy of the Weinstein Company.

Weinstein himself would not have to pay a penny to his accusers or have to admit wrongdoing under the terms of the settlement, the Times reports. The lack of personal accountability for the former movie producer has caused expressions of disappointment and anger from several of the women involved, though parties to the negotiations insist that the legal options open to them were limited.

“I don’t love it, but I don’t know how to go after him. I don’t know what I can really do,” the actor Katherine Kendall, who was allegedly sexually harassed by Weinstein in 1993, told the paper.

The pending settlement in the multiple civil lawsuits is by no means the end of Weinstein’s legal woes.

On January 6th, his criminal trial is scheduled to open with jury selection in a Manhattan court. The criminal charges against him include the alleged rape of a woman in 2013 and an accusation of forced oral sex on a similarly unnamed woman in 2006.

Weinstein has denied any claim of non-consensual sex, criminal or civil. In August

Weinstein was also charged with two counts of predatory sexual assault to allow a third woman, the actor Annabella Sciorra, to testify about an alleged rape in 1993. Though the statute of limitations has passed in that incident, prosecutors hope her testimony will demonstrate a pattern of behaviour on the part of the defendant that will help secure his conviction.

Weinstein has been free on bail since his arrest in May 2018. On Wednesday his bail conditions were raised from $1 million (€898,000) to $5 million (€4.4 million) after the prosecution accused him of tampering with his electronic ankle monitor.

Lawyers for Weinstein, who arrived at court on Wednesday walking with the use of a frame, had claimed the irregular handling of the bracelet was innocently caused by “technical glitches”. The pending settlement in the civil lawsuits was revealed by Megan Twohey and Jodi Kantor, the two New York Times reporters who first broke the news of

Weinstein’s long history of alleged sexual misconduct in October 2017, sparking the #MeToo movement. The reporters went on to be awarded a Pulitzer prize and to write a bestselling book on the subject, She Said. Aspects of the tentative deal will probably be contentious and have already prompted angry responses from some of Weinstein’s alleged victims.

In particular, more than $12 million (€10 million) out of a total $47 million (€42 million) package to close the Weinstein Company’s affairs would feed back to Weinstein himself along with his brother, Bob, and other board members to contribute to legal costs.

According to the Times, two women involved in civil suits against the former producer, Alexandra Canosa and Wedil David, have refused to join the settlement and are challenging it.

In a statement, Douglas Wigdor, a lawyer for David, said: “We reject the notion that this was the best settlement that could have been achieved on behalf of the victims. It is shameful that $12 million of the settlement is going to the lawyers for the directors who we alleged enabled Harvey Weinstein.”

He added: “We plan to vigorously object to any provision that tries to bind victims who want to proceed with holding Harvey Weinstein accountable for his actions which is exactly what we intend to do.” – Guardian