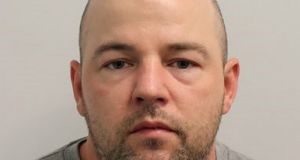 Joseph McCann, described as one of Britain’s “most dangerous” criminals, was jailed for life on Monday for carrying out dozens of sex attacks over a two-week period. Photograph: AFP/Metropolitan Police

A convicted burglar who assaulted and raped women and children during a two-week rampage across Britain while wrongly free from jail was given 33 life sentences on Monday, with the judge saying he would never cease to be a danger to society.

Joseph McCann (34), was convicted of 37 offences relating to 11 victims aged between 11 and 71, committed in April and May this year. He kidnapped seven people during the spree.

He will serve 30 years in jail before he is considered for release. Sentencing him at London’s Old Bailey Court, judge Andrew Edis said he was “a coward, a violent bully and a paedophile”.

“You have never expressed a word of regret or concern for your victims. You are entirely obsessed with yourself and believe you are entitled to use other people in any way you want,” he said. “You are a classic psychopath; I don’t think you will ever cease to be dangerous.”

The head of Britain’s probation service has apologised for mistakes in McCann’s case, after it emerged that McCann should have been in jail at the time of his rampage, having been caught committing a burglary while on parole for an earlier one.

Mr Justice Edis called for a “systematic and independent” investigation into how the “system failed to protect his victims from him”.

Britain’s system for monitoring and rehabilitating criminals has become a political issue ahead of Thursday’s election, after a convicted terrorist on parole killed two people in a stabbing attack on London Bridge on November 29th.

Prime Minister Boris Johnson accuses the opposition Labour Party of being soft on crime; Labour accuses the Conservative government of making the public less safe by under-funding the parole system.

McCann’s attacks began on April 21st, when he kidnapped a 21-year-old woman at knife point in Watford, north of London. Four days later, he kidnapped two more women in north London and subjected them to repeated rapes and sexual assaults.

They escaped when one hit McCann over the head with a bottle of vodka, but he eluded capture.

He then detained a woman in her home in northern England and sexually abused her children, aged 11 and 17, before raping a 71-year-old woman he attacked as she got into her car. He then kidnapped and sexually assaulted a 13-year-old girl in the car before both escaped and alerted police.

The manhunt ended when police spotted McCann’s car and cornered him hidden up a tree.

“McCann is one of the most dangerous offenders this country has ever seen and the sentence handed down today is a reflection of his heinous crimes,” Detective Chief Inspector Katherine Goodwin said. “We all had one ultimate aim - to bring McCann to justice and make sure no-one else will ever have to suffer at his hands.”

The victim impact statement of a 25-year-old woman who was subjected to a 14-hour rape ordeal after she was snatched on her way home in Walthamstow on April 25th was read out at the Old Bailey by prosecutor Daniel Fugallo.

She and another victim escaped after she hit McCann over the head with a vodka bottle outside the Phoenix Lodge hotel in Watford.

Following her kidnap, she was too scared to go home, suffered flashbacks and felt “constantly unsafe”. She said: “Even in the daytime I often feel jumpy and afraid, at home or outside. Going for a run, going out for the evening, going on holiday - doing any of these things alone is now impossible and it will take a long time to regain that freedom.”

The woman said her partner, who heard her being abducted and feared she was dead, had also suffered the “traumatic psychological fallout”. She went on: “My life as a young woman in her twenties looks very different to how it did - I spend more time at home, managing my trauma, where I used to spend my time throwing myself into the work I love, hanging out with friends, living spontaneously and engaging gregariously with the world.

“This has been a huge loss for me, especially at what was such an exciting time in my life and career.”

The woman told how she felt “exposed and vulnerable all over again” when details of her ordeal were aired in court and reported on the news. She said she felt unable to protect friends, family and her employer from the full “horror” of what had happened to her. She told how she questioned whether she could have acted differently or got away sooner, but added: “The fact that I am here to write this statement is testament to the answer: no.

“I had one chance. I did what I could in a situation that thankfully most people have no experience or understanding of - a situation for which nothing in my life had prepared me - and I survived.

“My aspirations, both small and big, and my vision of a positive future, have been violently taken from me. To replace a life of thriving with one of surviving is deeply demoralising and difficult. I can only hope that this process will take us one step closer to building a society in which rape and sexual assault are never excused, in which the voices of victims and survivors are heard and respected, and in which this can never happen to anybody else.”