Faiza Shaheen is an Oxford graduate and Labour candidate in North London and she is hoping for one of the biggest upsets in this UK election by unseating Conservative MP Iain Duncan Smith. Video: Enda O'Dowd 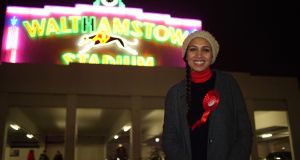 Faiza Shaheen, Labour candidate in Chingford and Woodford Green in north London: pitching herself as a local working girl fighting for working people who “were on the raw end of Iain Duncan Smith’s cruel and heartless welfare reforms”. Photograph: Enda O’Dowd

“But it’s my name on the ballot,” implores Faiza Shaheen to a constituent on Cherrydown Avenue in north London as the Labour candidate aims to score one of the biggest upsets of the UK general election.

The left-wing economist is out on one of her final canvasses of the campaign as she tries to win over undecided voters.

She is hoping to unseat Conservative grandee Iain Duncan Smith, the party’s former leader and an MP since 1992, in the Tory bulwark of Chingford and Woodford Green on the edge of London.

It is a tough sell to the Royal Mail postman on his doorstep who has, like many voters, misgivings about Labour leader Jeremy Corbyn.

It does not stop 36-year-old Shaheen, an Oxford graduate with a PhD, spending more than 15 minutes at his door on a cold, damp December evening trying to turn him away from the Tories.

Shaheen, a director of a centre-left think tank, is stunned the “postie” is leaning that way.

“I know exactly what they think of us because I have seen them, the Etonians of the world, the Jacob Rees Moggs and the Boris Johnsons,” Shaheen says she told the man. “If you think that they have got your interests at heart, then I am sorry you are completely wrong.”

Akin Gazi, Shaheen’s husband, tells The Irish Times the postman was being won over by Shaheen’s local, working-class roots in this outer-London suburb.

The daughter of a mechanic father from Fiji and lab technician mother from Pakistan, Shaheen comes from Muslim home. She has been compared to Alexandria Ocasio-Cortez, the young Democrat turning heads in the US.

She points out to the postman that she worked in a cafe up the road from his house as a teenager.

“That was the chink in his armour. We started to break him down a little bit,” says Gazi, referring to Shaheen’s “star power” that is getting her noticed with her impressive personal backstory, slick campaign video and a smart social media blitz.

“We have worked really hard, going back to undecideds and to squeeze them as much as possible and, if nothing else, getting them to not vote Tory or even hover over my name and think about it,” says Shaheen.

Those of us that understand how government policy can damage people’s lives are the people that need to be running in politics, not the people that live in mansions, went to Eton and have no idea of hardship

Chingford and Woodfood Green, once the political home of Norman Tebbit and Winston Churchill, is a key target for Labour this time around as changing demographics have chipped away at Duncan Smith’s majority over the past two decades. Young professionals and working families have moved out from central London to a constituency straddling London and Essex in search of more affordable and bigger homes.

Duncan Smith saw his majority slashed from 8,400 to 2,400 in 2017. Labour hopes Johnson’s “get Brexit done” campaign slogan and the arch Brexiteer’s reputation as the mastermind of Conservative austerity as work and pensions minister (2010-2016) will help Shaheen among remain-supporting Tory voters in a wafer-thin anti-Brexit seat (50.15 per cent remain) and people angry at Conservative cuts to public services.

Narrowing polls show the constituency’s status as an in-play marginal, confirmed by Johnson himself visiting the former leader’s constituency to shore up support for a Tory MP of 27 years’ standing. In the other camp, Hugh Grant, the Love Actually actor campaigning for candidates of various parties in a tactical voting drive to prevent a Tory majority, swung by here for Shaheen last week in a high-profile endorsement.

Shaheen is pitching herself as local working girl fighting for working people from her locality who “were on the raw end of Iain Duncan Smith’s cruel and heartless welfare reforms”. Her mother relied on disability benefits to survive while awaiting for a heart transplant, and was reassessed for welfare cuts under Duncan Smith.

‘No idea of hardship’

“I am not scared to say it is personal and people act like that’s a bad thing. Those of us that understand how government policy can damage people’s lives are the people that need to be running in politics, not the people that live in mansions, went to Eton and have no idea of hardship,” she says, standing under Walthamstow Stadium, the dog track in the southern, Labour-leaning end of the constituency.

At his constituency office in the northern, Conservative-leaning end of the constituency, Duncan Smith is not concerned about an anti-establishment upstart giving him the biggest constituency fight of his career.

“I fight every election to win it and as far as I’m concerned we are very confident that we have got all the votes here that we need to,” the 65-year-old, who has won seven general elections, tells The Irish Times.

He sees the true-blue constituency remaining Conservative for two reasons: people’s frustration with Brexit trumping anger over Tory austerity as voters want out of Europe, and many people viewing Corbyn as toxic.

“Pretty much nobody really wants to see him on Friday morning in government or in a government so the antipathy to him is very strong. In 27 years I have never had that from any Labour leader ever before or even a Conservative leader,” says Duncan Smith.

Corbyn’s plan to tax the rich concerns undecided locals here and his failure to stamp out anti-Semitism in his party has also alienated voters. Tellingly, Shaheen’s campaign literature makes no reference to the party leader.

“The anti-Semitism has been a huge issue of embarrassment and shame for us,” she said. “We should be held to higher standards and dealt with those complaints much quicker. We didn’t have the processes in place.”

But she also feels opponents have demonised Corbyn and turned into “some kind of ultimate baddie”.

“It’s a gaslighting of the whole nation,” she said.

In interviews, Shaheen mentions Duncan Smith repeatedly, while Duncan Smith does not mention her once. The Labour candidate is clearly competing against him and Duncan Smith against Corbyn.

It has been a tense election here. Duncan Smith had his constituency office vandalised and received death threats. A dead rat was sent to him in the post. One of Shaheen’s female canvassers was reportedly threatened.

“This is the most violent campaign I have ever seen,” says Duncan Smith.

He goes so far as to draw parallels between the anti-Semitism in the Labour Party and 1930s Germany.

“The language I’ve seen used in there is the language you can see if you go back into history and look at that period before Kristallnacht in Germany,” he says, referring to the 1938 pogrom against Jews in Nazi Germany. “It starts with this kind of language where you isolate and threaten. Then it ends up with danger and violence and we need to stop that before it gets out of hand.”

Corbyn supporter Naomi Wimborne-Idrissi, spokeswoman of Jewish Voice for Labour, accuses the Labour leader’s opponents of running a “witch hunt” against him.

“It would be grossly unfair for Faiza – who is obviously from a minority community herself and who has experienced racism – of being accused of being part of an anti-Semitic party,” she said.

“It is totally off the wall.”

The vitriolic election race has been a turn-off for constituents.

“I am burying my head. It is all quite depressing,” says undecided voter Sarah Kelly, outside Chingford’s train station. She does not trust Johnson and feels Corbyn would tax the well-off too much: “Under his plans we would be worse off. I would have to go back to work full time and wouldn’t see my kids as much.”

Barry Sable, a retired engineer standing outside Chingford’s train station, has switched between the Tories and Labour over the years but will vote Conservative this time.

In South Chingford, barber Owen Baldwin, who has lived here since 1950, has Duncan Smith posters all over his shop, three doors up from the Labour Party’s constituency office.

He believes Shaheen will close the gap on Duncan Smith because of the numbers of people who have moved from central London, but he fears Corbyn’s plan to nationalise the Royal Mail, rail-operating companies and other utilities, remembering the 1960s and 1970s “when everything was on strike”.

What will he do if Labour takes his home constituency for the first time?