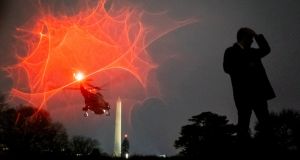 Marine One departs Washington on Tuesday with US president Donald Trump on board. Democratic leaders unveiled articles of impeachment on Tuesday charging Mr Trump with abuse of power and obstruction of Congress. Photograph: Pete Marovich/New York Times

The House judiciary committee was due to begin debating articles of impeachment against US president Donald Trump on Wednesday night amid expectations that it could vote on legislation to impeach the president as early as Thursday.

The 41-member committee was due to gather at 7pm on Capitol Hill and continue debating – and possibly amend the legislation – throughout Thursday before taking a vote. If passed, as expected, the proposal will move to the full House of Representatives for a vote next week.

The committee filed two articles of impeachment against Mr Trump on Tuesday, charging the president with abuse of power and obstruction of Congress over his dealings with Ukraine. The impeachment inquiry, which began in September, has focused on a July 25th phone call between Mr Trump and Ukrainian president Volodymyr Zelenskiy during which Mr Trump asked his counterpart to investigate his Democratic rival Joe Biden and his son Hunter, who was on the board of a Ukrainian gas company.

Ahead of the gathering of the judiciary committee there were reports that the House could vote on impeachment earlier than expected – possibly in the middle of next week.

The Democrat-controlled House is facing a busy schedule before it plans to break for Christmas on Friday December 20th, not least the prospect of a shutdown if spending bills are not agreed. Government funding runs out on the Friday before Christmas, and treasury secretary Steve Mnuchin held meetings with House speaker Nancy Pelosi and senior Democrats on Wednesday in a bid to secure agreement on budget priorities.

The possibility of a pre-Christmas shutdown had raised comparisons with December 2018 when the government shut down on December 22nd, prompting a 35-day federal government closure – the longest in US history.

Democrats have also signalled they want to vote on the USMCA deal – the United States, Mexico, Canada agreement that will replace Nafta, a decades-old deal governing trade between the three countries – before the Christmas recess.

They are now admitting that there was no collusion, no obstruction of justice, there are no crimes

A vote on lowering prescription drug costs may also be held in the next 10 days, putting further pressure on the congressional timetable.

Speaking at a campaign rally in Hershey, Pennsylvania on Tuesday evening, Mr Trump lashed out at Democrats for launching impeachment proceedings, suggesting that the party’s leadership was adopting “impeachment-light”.

“They are now admitting that there was no collusion, no obstruction of justice, there are no crimes,” he said. “All of these horrible things, bribery and this and that, where are they? This is the lightest, weakest impeachment.”

As Washington gears up for a possible impeachment trial in the Senate early next year, a new poll found that public sentiment towards impeachment has barely changed following public hearings last month.

The Monmouth University Poll – taken last week, before the judiciary committee unveiled articles of impeachment against the president – showed that approximately 45 per cent of Americans believe that Mr Trump should be impeached and removed from office, while 50 per cent do not. This compares to the 44 per cent of respondents supporting impeachment a month ago, compared to 51 per cent who were opposed.

Meanwhile, on Wednesday, Michael Horowitz, the inspector-general of the Department of Justice, who released a report on the origins of the Russia investigation earlier this week, testified before the Senate judiciary committee.

Under questioning Mr Horowitz said that his report did not vindicate the FBI, noting that the agency had “failed to comply with FBI policies” when it applied to the court for permission to wire-tap Carter Page, a member of Mr Trump’s election campaign team in 2016.

Mr Horowitz’s report also found no political bias in the FBI’s decision to open an investigation into Russian electoral interference in the 2016 election, despite suggestions by Republican members of the panel that significant elements in the agency were biased against Mr Trump.