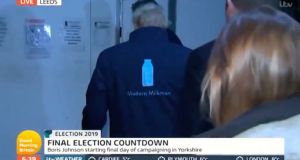 Boris Johnson heads to a fridge to cool off on the UK election campaign trail. Photograph: ITV screenshot

Labour leader Jeremy Corbyn has poked fun at the British prime minister who was seen entering a fridge in an apparent attempt to avoid being interviewed by a television reporter.

Mr Johnson’s head of press Rob Oxley can then be heard saying “oh for f***’s sake” to which Morgan and Reid are heard expressing their shock in the studio.

Swain then said: “Do you want to tone your language down as well because people are watching this this morning.”

Mr Corbyn later poked fun at Mr Johnson for the encounter which happened on a visit to a milk delivery business in Yorkshire.

On a campaign stop in Middlesbrough on Wednesday afternoon, Mr Corbyn said: “I’ve not come here to deliver milk, or to hide in a fridge. I’ve come here with a message of hope.”

Former Tory MP David Gauke, who is standing as an independent candidate in South West Hertfordshire, posted a photo of himself inside a fridge on Twitter.

He joked that he was “not hiding” from Good Morning Britain presenters Piers Morgan and Susanna Reid by standing inside the fridge-freezer.

The prime minister was loading crates of milk and juice bottles onto a delivery vehicle in Leeds on his last day of campaigning ahead of Thursday’s British general election when he was approached by a reporter from ITV.

The reporter persistently asked if Mr Johnson would appear on the programme, to which the Prime Minister said: “Of course I will.”

He was then seen walking away after loading crates into a vehicle at Greenside Farm Business Park. Asked again for an interview, he replied: “I’ll be with you in a second” and then he walked into a fridge with staff from the business park. - PA