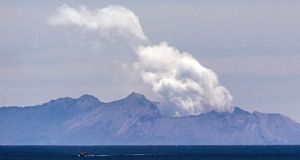 About 30 people were taken to hospital suffering burns following the incident on Monday, with all but five in a stable but serious condition.

Two more people, the seventh and eighth fatalities, whose nationalities have not been given, have now died in hospital.

Nine people have been confirmed as missing, according to authorities.

An operation to recover victims from the island has been delayed amid fears of worsening conditions, police said on Wednesday, as monitoring agency GeoNet said further eruptions on the island were likely.

Police said it was too dangerous to return to the island at the moment owing to the “serious physical and chemical hazards” rescuers would face.

Monday’s explosion took place at White Island, which lies some 50km off the mainland in the Bay of Plenty. Australian Gavin Dallow (53) and his stepdaughter Zoe Hosking (15) were identified among the victims earlier on Wednesday.

“Our hearts break at the loss of Zoe at such a young age,” the Dallow family said in an emailed statement. “We mourn the loss of Gavin and Zoe.”

Twenty five people have horrific burns to 30 per cent or more of their body and 22 are also on airway support due to the severity of their burns, said medical authorities.

“We anticipate we will require an additional 1.2 million square centimetres of skin for the ongoing needs of the patients,” Counties Manukau chief medical officer Dr Peter Watson said at Middlemore Hospital in Auckland.

“The nature of the burns suffered is complicated by the gases and chemicals in the eruption. This has necessitated more rapid treatment of these burns than is the case for thermal-only burns,” said Dr Watson.

“This is just the start of a very long process that for some patients will last several months,” he said.

The Australian government said it expected to transfer up to 10 injured citizens from New Zealand starting in the next 24 hours, if medical staff approve them for travel.

Authorities monitoring the uninhabited island said conditions were worsening and there was now a 40-60 per cent chance of a massive eruption similar to Monday in the next 24 hours.

A plume of smoke could still be seen coming from the island.

“I’ve spoken to many of those involved in the operation and they are very, very eager to get back there, they want to bring people’s loved ones home,” New Zealand prime minister Jacinda Ardern said in an interview with Reuters in Wellington.

Aerial surveillance has detected no signs of life on the island, where at least one tour group was captured on automated webcams in the crater just a minute before the eruption.

Police said the safety of recovery teams was the priority and are awaiting advice from experts on when they could access the island. That has prompted some criticism authorities are being too cautious.

“We cannot put other people in jeopardy to go out there until we’re absolutely certain that the island is actually safe,” acting assistant commissioner Bruce Bird told a media conference in Whakatane, the town that is an access point for tourist trips to the island.

There were 47 people on White Island at the time of the eruption. Twenty-four of those were from Australia, nine from the United States, five from New Zealand, four from Germany, two each from China and Britain and one from Malaysia.

Daily tours bring more than 10,000 visitors to the privately owned island every year, marketed as “the world’s most accessible active marine volcano”.

GeoNet raised the alert level for the volcano in November because of an increase in volcanic activity. The alert level was increased further after the eruption, and remains elevated. – Reuters