Telegraph poll says the Conservative lead is down to five points 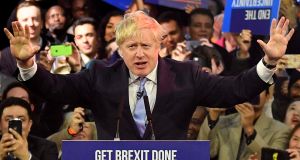 Boris Johnson at the Copper Box Arena in London, on Wednesday. Britain’s prime minister spent the final day of the campaign trying to persuade voters to give him a governing majority. Photograph: Leon Neal/Getty Images

Britain goes to the polls on Thursday in an election that will determine the future of Brexit and the economic direction of the country, as Boris Johnson attempts to secure a Conservative majority. In his closing rally in east London on Wednesday night, the prime minister portrayed the election as a stark choice, accusing Labour leader Jeremy Corbyn of representing a threat to national security.

“This contest is tight and getting tighter,” the prime minister told hundreds of Conservative activists at an arena on the site of the 2012 Olympic Games.

Polls show the Conservatives with a nine-point lead over Labour and a YouGov analysis based on more than 100,000 interviews in the last week suggested that Mr Johnson was on course to win a 28-seat majority. But the poll’s margin of error also allows for a hung parliament with the Conservatives as the largest party. A poll by the Daily Telegraph and Savanta ComRes, published on Wednesday night, placed the Conservatives just five points ahead of Labour.

Mr Johnson has promised to secure parliamentary approval for his Brexit deal if he wins a majority and to take Britain out of the EU by January 31st. If he fails to secure a majority, the Conservatives will struggle to form a government because none of the opposition parties are willing to support Mr Johnson.

The DUP, which had a confidence and supply agreement with the Conservatives after the 2017 election, oppose Mr Johnson’s Brexit deal because it could require Northern Ireland to follow different regulations and customs rules to the rest of the United Kingdom.

Mr Corbyn spent the last day of the campaign travelling across the country to address supporters, portraying the election as a choice between the establishment and the people.

“The establishment doesn’t want Labour to win. They don’t want a Labour government on the side of the people, shaking up how this country is run. Boris Johnson won’t just keep everything the same, he will make it worse. He will open our NHS to takeover by American mega corporations and carry on with more cuts,” he said.

The final days of the campaign have seen the contest tightening after Mr Johnson faced criticism for refusing to look at a picture of a four-year-old boy who had to sleep on the floor of a hospital because of overcrowding. Labour has sought to shift the focus away from Brexit and on to the NHS and other public services while Mr Johnson has attempted to make the election a choice about Brexit.

Polls open at 7am on Thursday and close at 10pm, when broadcasters will release the results of an exit poll. Counting will continue through the night with a final declaration expected about 7am on Friday.