Inquiry into Russian interference in US election in disarray 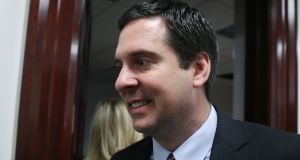 House Intelligence Committee chairman Devin Nunes: it recently emerged he had received information allegedly germane to the inquiry in the grounds of the White House but it is not clear how he obtained clearance to be there. Photograph: Mark Wilson/Getty

A congressional inquiry into Russian interference in last year’s US election has been thrown into disarray amid continued pressure on the chairman of the House Intelligence Committee to step down from the investigation.

Pressure has been mounting on Devin Nunes, the Republican representative from California, since last week following his decision to brief the media and US president Donald Trump about information he allegedly received claiming that US intelligence services inadvertently spied on Trump associates.

Democrats reacted with fury to the decision by the representative from California not to inform his colleagues first about the information. The controversy deepened further when it emerged that Mr Nunes had received the information in the grounds of the White House. Mr Nunes, who worked closely with Mr Trump during last year’s election campaign and was a member of the Trump transition team, has refused to disclose the identity of the anonymous source.

The deepening controversy has effectively stalled the work of the committee, which was due to privately meet FBI director James Comey and Michael Rogers, head of the National Security Agency on Tuesday. Instead this meeting was cancelled, and at least one further meeting has been cancelled for this week.

It also emerged that Mr Nunes cancelled a planned public session with Mr Comey, Mr Rogers and former acting attorney general Sally Yates last week. The Washington Post reported that the White House moved to ban Ms Yates from testifying at the hearing, a claim which has been refuted by the White House.

Speaking on Wednesday, White House press spokesman Sean Spicer said he saw “no reason” for Mr Nunes to recuse himself from the investigation. Pressed by reporters as to how Mr Nunes had obtained clearance to enter the White House Mr Spicer said he had no new information regarding the meeting between the Republican congressman and the source.

But the continued controversy over Mr Nunes – and the decision by the top-ranking democrat on the committee Adam Schiff to ask him to stand down – has raised questions about whether the committee can continue with its work, with some suggesting the Senate Intelligence Committee should take a leading role.

Leading members of the Senate Intelligence Committee confirmed on Wednesday that seven staff members were working on its own inquiry, which is due to host its first public hearing on Thursday. Senate committee chairman Richard Burr, describing the inquiry as one of the biggest he has seen during his time on Capital Hill, said that 20 individuals had been requested to address the hearing, five of which had been scheduled, adding that the committee was prepared to issue subpoenas if necessary. Asked if retired national security adviser Mike Flynn had been requested to attend, Mr Burr said it was “safe to say” he had. He also said that the committee would only interview Mr Trump’s son-in-law Jared Kushner when they knew the “scope of what is needed”.

Senator Mark Warner, who also sits on the committee, said that it was important not to lose sight of the “big picture”.

“An outside foreign agency sought to hijack our electoral process and in that process decided to favour one candidate over another,” he said, adding that “getting it right is more important than getting it done quickly”.

However, others have called for a full public inquiry or a special prosecutor to be appointed, believing that a non-congressional hearing is the only way to undertake a full review into Russia’s interference in the election, which is likely to include an investigation into alleged links between Trump campaign officials and the Kremlin.

As internal tensions deepened in Washington over the Russian investigations, the area around Capitol Hill was briefly put on high alert on Wednesday morning and one building put on lockdown after DC police confirmed that a woman tried to ram a police vehicle and run over several police officers with her car.

While shots were fired, there were no injuries and the woman was taken into police custody.