Washington as seat of power becomes seat of unrest once again

America Letter: Militarised capital site of skirmishes in zone which is district not state 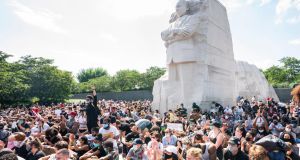 A Black Lives Matter protest takes a knee at the Martin Luther King Memorial on the seventh day of protests in DC over the death of George Floyd, who died in police custody. Photograph: Jim Lo Scalzo

As protests gripped the United States this week, Washington DC found itself at the centre of the demonstrations over George Floyd’s death.

The city has seen its share of conflict since it was chosen as the nation’s capital after the war of independence. In 1814 the city burned when it was invaded by British troops. During the civil war, Washington was the centre of the Union effort, even as it was surrounded by the confederate-controlled Virginia and slave-owning Maryland.

In the 1960s, thousands of people descended on the National Mall during the anti-war and civil rights protests.

This week, unrest returned to the streets, as protesters brought their demonstrations to the gates of the White House. The marches began on Friday last week when a spontaneous protest began at 14th and U Street, growing as it made its way to 1600 Pennsylvania Avenue.

Skirmishes broke out outside the treasury building near the northeast corner of the White House, prompting the secret service to move President Donald Trump briefly to an underground bunker, though Trump later insisted he was simply “inspecting” the room.

Tensions erupted on Monday evening when police forcibly cleared protesters using rubber bullets and chemical spray from Lafayette Square to facilitate Trump’s walk to St John’s Church, where he posed with a Bible.

These scenes of violence faded as the week went on. But while a pattern of peaceful protests set in, Washington became increasingly militarised. By midweek, the protected perimeter around the White House expanded, and armed police and military vehicles patrolled the streets.

Worryingly, the identity of the law enforcement personnel standing behind shields and protective gear was unclear in some cases, as some did not wear identification. In addition to Washington DC’s police force, mayor Muriel Bowser mobilised the DC National Guard – a unique branch of the US military that is manned by citizen-soldiers – while National Guard units were also sent from other states.

At one point, personnel from multiple agencies were patrolling the streets – including the FBI, the Department of Homeland Security and special operation forces from the Bureau of Prisons.

Active-duty troops from the 82nd airborne division were also summoned by Trump, though they remained on the outskirts of the city and flew back to base on Thursday and Friday.

The presence of such diffuse and substantial military personnel in Washington was allowed because the justice department and secretary of the army have significant authority over federal ground in the capital. DC – the District of Columbia – is not a state, and the mayor lacks the broad powers afforded to governors across the country.

Bowser – already furious at the dispersal of peaceful protesters on Monday – demanded that all out-of-state personnel leave Washington. On Friday, the mayor renamed an area near the White House Black Lives Matter Plaza.

While the use of military to quell largely peaceful protests prompted unease among many military leaders – Trump’s current and former defence secretaries said they opposed using the army to deal with domestic unrest – this week’s events in Washington have also revealed problems with the city’s unique status as a federal city with no voting rights in Congress.

DC has long argued that the district should be afforded statehood – “End taxation without representation” is stamped on all vehicle number plates in the district.

But Republicans (correctly) fear that granting statehood to DC would boost Democrats, given that the district is overwhelmingly left-leaning. Hillary Clinton won more than 90 per cent of the vote in DC in 2016.

The clash over control of Washington’s streets may play out in other ways as the death of George Floyd reverberates.

In a highly contentious decision, Virginia governor Ralph Northam announced this week that the statue of confederate leader Robert E Lee would be removed. The statue in Richmond – the capital of the southern confederate army during the civil war – is one of the largest in the country.

The image of a horse-mounted Lee, unveiled in 1890, towers over the other statues of southern heroes that line Richmond’s Monument Avenue. Because the state owns the Lee statue, Northam can move ahead with its removal. The other four statues are owned by the city, and a vote by the city council is expected imminently.

Given the violence that erupted in nearby Charlottesville over the proposed removal of a confederate statue in 2017, Northam’s move is a bold one. The battle over the future of confederate statues could be the next flash point in the debate over race inequality taking place across America.