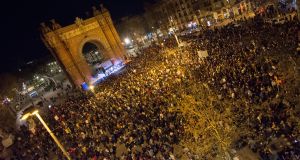 A women’s rights demonstration, held just days before Spain declared a state of emergency in March, is the focus of a political storm which is polarising an already fractured parliament and exposing the leftist government to accusations of meddling in the security forces.

March 8th, international women’s day, has become a major date in the Spanish calendar, prompting tens of thousands of people to take to the streets of Madrid and other cities. This year, although about 400 coronavirus infections and eight deaths had been registered by that date, the demonstrations went ahead.

The right-wing opposition is pointing to the marches as evidence of the leftist government’s willingness to put its pro-feminist agenda ahead of public safety.

Spain is one of the European countries which has been hardest hit by the virus, with more than 27,000 deaths officially recorded – although the civil register says there were about 43,000 more deaths than normal during the virus’s peak. The rates of daily deaths and new infections have plummeted in recent weeks, and the country is now in the process of lifting its lockdown.

Pablo Casado, leader of the main opposition Popular Party (PP), said on Wednesday that “being a feminist doesn’t mean putting at risk hundreds of thousands of women”, in a reference to the March demonstrations.

Although some PP politicians took part in the marches, the party has been highly critical of the decision to allow them to go ahead a week before a national state of emergency and lockdown were declared.

Those who defend the decision to go ahead with the demonstrations point out that several top-tier football games were played that weekend, and that cinemas, museums and schools were still open.

This has fed into an existing debate in which the right has claimed that the parties of the governing coalition – the Socialists and Podemos – have sought to monopolise the feminist issue. The left, meanwhile, accuses the opposition of misogyny.

The leader of the far-right Vox, Santiago Abascal, said Mr Sánchez’s defence of the March 8th events was like saying “long live the illness, and long live death”.

The controversy has now moved into the judicial sphere. A judge, Carmen Rodríguez-Medel, has named the government’s representative in Madrid, José Manuel Franco, as a suspect as she investigates whether the decision to allow the demonstration in the capital amounted to negligence. He is due to appear in court on June 10th.

The civil guard police force has contributed to this investigation, drawing up two reports on the events of March 8th and its build-up.

Initially interior minister Fernando Grande-Marlaska claimed that the dismissal was purely due to a “restructuring” of the force’s hierarchy. However, leaked ministry documents have suggested that Mr Pérez de los Cobos was removed because he did not inform the government of the initial report his force was writing, which has been widely criticised for containing a number of factual errors.

The opposition is now calling on the minister to resign for having allegedly lied to parliament about his reasons for sacking the officer and meddling in the civil guard.

The PP and Vox have frequently claimed throughout the coronavirus crisis that Mr Sánchez’s government has abused both its relationship with the security forces and its use of the national state of emergency, which is due to expire on June 21st.

“With his more than questionable handling of this situation, [Grande-] Marlaska has managed to annoy judges, judicial associations and, once again, provoke disproportionate criticism by the opposition,” noted El Periódico newspaper.