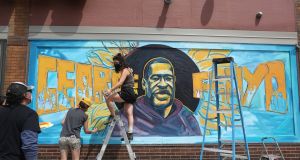 A mural depicting George Floyd in Minneapolis. He died after a policeman in the course of an arrest pressed his knee down on the prone man’s neck for eight minutes. Four policemen were subsequently dismissed. Photograph: Jenn Ackerman/The New York Times

The stark reality of race relations in 21st-century America was laid bare in the nation’s heartland this week.

On Monday, a 46-year-old African-American man died in police custody after his arrest by four white policemen in the mid-western city of Minneapolis.

Video footage filmed by a passerby showed one of the officers place his knee on the neck of George Floyd for several minutes as he lay on the ground pleading for him to stop. He later died in hospital.

By Wednesday night the streets of Minneapolis were in flames.

Dozens of buildings were destroyed during rioting and looting as protests over Floyd’s death flared into violence. Protesters clashed with police and fire fighters, hurling rocks and bottles at authorities. After a third night of rioting a CNN TV crew was arrested live on air.

The dramatic scenes contrasted with the footage of Floyd’s death. The amateur five-minute film captured on the phone of an onlooker is shocking in its ordinariness. As they pin their detainee to the ground, half hidden by a police car, an officer looks into the distance with an almost casual air.

An uneasy silence permeates the scene, broken only by the intermittent groans of the victim and his pleas for them to stop.

The circumstances of Floyd’s death prompted a swift reaction from authorities. The four officers involved were fired by the Minneapolis police force. A criminal investigation is under way by the US justice department, the FBI and local authorities. House of Representatives speaker Nancy Pelosi called the death murder. Minneapolis’s mayor, Jacob Frey, said Floyd would be still be alive if he was white.

Floyd’s death was particularly redolent of the killing of another unarmed black man. Eric Garner died in 2014 after being held in a chokehold by a New York police officer. His final words – “I can’t breathe,” which he uttered 11 times before he died – became a rallying-call for the Black Lives Matter movement that emerged as a response to police brutality and accusations of institutionalised racism in the police force.

The utterance of the same words six years later by George Floyd made his death this week all the more symbolic, an indication of the cycle of violence and racial injustice that continues to plague the American criminal justice system.

Floyd’s death is not the only recent example of a murder of an unarmed black man by white assailants.

Three white men were arrested this month in Georgia after a young African-American man was shot dead while jogging on a Sunday afternoon after being pursued by a father and a son carrying weapons in a pick-up truck.

Though a police report was filed at the time of the incident in February, no charges were initially brought. But video footage of Ahmaud Arbery’s death spurred widespread public interest in the case and the men were subsequently charged with murder.

Though less serious, another instance of racial injustice unfolded this week in Central Park. A white woman who was walking her dog phoned the police when an African-American man asked her to put the dog on a leash, as the rules required.

The man, who was bird watching, filmed the incident, which showed the woman telling a 911 operator that “an African American man is threatening my life”. Following outcry on social media the woman lost her job, her reputation and her dog – she returned the animal to a rescue home following anger about how she had yanked the dog’s collar.

The birdwatcher, Christian Cooper, later acknowledged her apology and denounced death threats that she was reported to have received. But he said her act was undoubtedly racist, noting that she was tapping into assumptions that African-Americans have had to deal with for centuries.

Though the incident did not result in the death or wrongful imprisonment of a person, the woman’s instinctive decision to call the police recreates a specific kind of gendered dynamic that has underpinned race relations for a long time.

From Harper Lee’s To Kill A Mockingbird to EM Forster’s A Passage to India, literature is filled with the trope of a white woman falsely calling out the threat from a non-white male.

Though different in scale, this week’s incidents in Central Park and Minneapolis are a reminder of the deep and perhaps unconscious racial assumptions that exist just under the surface in a country that is still dealing with the legacy of slavery and segregation.