Little evidence of a ‘guiding hand’ behind US protests

Analysis: Despite Trump pointing to groups like Antifa, vast majority of those protesting in recent days are just ordinary citizens 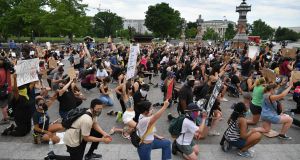 As the United States continues to be gripped by some of the largest mass protests in recent memory, focus has turned to the identity of those behind the demonstrations.

US president Donald Trump has led claims that “radical left” anarchists and outside extremists are behind the civil unrest. On Sunday, following a night of demonstrations that saw looting and rioting in some areas of the country, Trump announced he was designating Antifa a terrorist organisation.

In a press conference, attorney general William Barr also pledged to clamp down on “domestic terrorism”.

Antifa – a contraction of “anti-fascist” – refers to a diffuse, far-left movement that emerged as a response to the far-right groups that have gained ground in the US in recent years. But the group is not a specific entity per se, with no single chain of command. As a result there is a concern that protesters could be picked up at will by authorities and labelled s “terrorists”.

Further, no domestic terrorism law exists in the United States. The Trump administration, indeed, has resisted calls from Democrats such as Alexandria Ocasio-Cortez to label white supremacism – seen for example in the attack by 19-year-old Dylan Roof on a black church in South Carolina in 2015 – domestic terrorism.

It’s also noteworthy that as the protests enter their second week, the Trump administration has so far not produced any evidence that organised radical political movements are behind them.

While law enforcement officials have said that there is evidence of organised crime using the cover of the George Floyd protests to cause mayhem – including in Los Angeles – it is unlikely that Antifa has the resources or organisation to orchestrate violence on any major scale.

On Tuesday, Facebook confirmed it had removed false accounts purporting to be operated by Antifa groups. It is believed these accounts were set up by white nationalist groups seeking to blame left-wing movements for the violence that has marred some protests. Twitter also removed tweets warning that Antifa was preparing to “move into residential areas”, that were sent by white supremacist groups.

Even as social media has helped publicise demonstrators and brought to global attention the circumstances of the death of George Floyd in Minneapolis, which were captured on the phone of a passerby, the events of the last week have been plagued by false information on these platforms.

Conspiracy theories have flourished on the internet, including a theory that Floyd is still alive and that his death was staged. Other accounts claim the protests are being funded by George Soros, the prominent Hungarian-born billionaire and philanthropist.

Even in Minnesota, the state where Floyd was killed last week, the messaging has shifted.

Following scenes of chaos at the weekend when buildings were burned to the ground in Minneapolis, state governor Tim Walz said “let’s be very clear. The situation in Minneapolis is no longer in any way about the murder of George Floyd . . . It’s about attacking civil society.”

He said there “was reason to believe” that bad actors were infiltrating the protests.

But as the protests have turned less violent in recent days, there has been a move away from this rhetoric as officials seek to identify specific actors and begin to comb through information related to those who have been arrested.

The protests have also refocused attention on Black Lives Matter, the group that emerged during the Obama presidency to campaign against systemic racism in the American criminal justice system in the wake of a series of high-profile deaths of African-American men, such as that of 17-year-old Trayvon Martin who was shot dead in Florida while walking home from a convenience store.

While many of the protesters taking to the streets across the country and the world this week gripped “Black Lives Matters” signs, the group had become less visible in communities and online in recent years. The death of George Floyd has propelled their cause back to the forefront of political debate in the US.

The tradition of black protest in the US stretches back through generations. From the non-violent protest politics practiced by Martin Luther King to the more militant action embraced by figures such as Malcolm X and the Black Panthers, the debate about how best to respond to racial oppression and injustice has gone on for decades.

With the US now in the midst of a new phase of mass protests, the presence of nefarious actors on the right or left is likely to be unconfirmed for some time as investigations begin. What is clear, however, is that the vast majority of people protesting in recent days were ordinary citizens, exercising their constitutional right to protest, and reflecting the demographics and social and political spectrums of their communities.