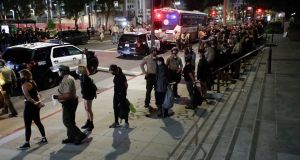 Demonstrators over the death of George Floyd are arrested for a curfew violation in Los Angeles on Wednesday. Photograph: Marcio Jose Sanchez/AP 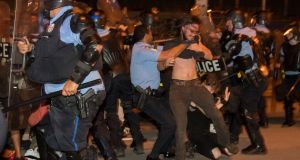 A former mayor of Minneapolis is blaming leaders of the local police union for fostering an “us-versus-them” culture that hinders oversight of officers in the city where George Floyd was killed.

RT Rybak, who held the midwestern city’s top elected job for three terms between 2002 and 2013, said that failing to reform the Minneapolis Police Department continues to haunt him.

Mr Rybak said racists could be found in police departments across the country – “lots of them”. But he said holding officers accountable had been made more difficult by union leaders who question whether outsiders can truly understand police work.

“It’s made worst in this city and many other cities by police federation leadership that plays into that us-versus-them by constantly blaming others and giving comfort to the idea that there doesn’t need to be any police change – everybody else needs tounderstand us better,” he said.

Mr Floyd died last week after a police officer, Derek Chauvin, knelt on his neck. Mr Chauvin, who has been fired by the department, has been charged with second-degree murder, and three other former officers have been accused of aiding and abetting murder.

Tim Walz, Minnesota governor, said on Tuesday the state would investigate the Minneapolis Police Department for civil rights violations, with the goal of negotiating a consent decree.

Local attention also has been focused on statements made by Bob Kroll, president of the Minneapolis Federation of Police. Janeé Harteau, a former Minneapolis police chief, said on Monday that Mr Kroll should “turn in his badge” after a memo surfaced in which he called the events in the city a “terrorist movement”.

Jacob Frey, the current mayor, said: “For a man who complains so frequently about a lack of community trust and support for the police department, Bob Kroll remains shockingly indifferent to his role in undermining it.”

Mr Kroll did not respond to a request for comment. However, in an April interview posted on YouTube, he acknowledged his contentious relationship with civil authorities: “I’ve locked horns with three mayors now, and I can’t say this one’s the worst.”

That opposition to oversight contributes to cities paying steep legal judgments and settlements. Chicago paid $113 million in 2018, which does not include the cost of legal fees. “The police union, unfortunately, has literally protected the worst among them,” Ms Van Cleve said.

She said police unions attempt to intimidate politicians who call for reform. In New York, mayor Bill de Blasio spoke about the tension between police and racial minorities in 2014, and police turned their backs on him at the funeral of two officers who died in the line of duty.

In Minneapolis, Mr Rybak said that he routinely saw officers whom he knew and respected “act differently when they were in the collective culture”.

“In America today, we are all learning that when we have tough complex issues some parts of the population will resonate to leaders who say to us, there’s a simple problem, and it’s created by somebody else,” he said. “That’s even more true in policing.”

Mr Rybak – who now runs the Minneapolis Foundation, which plans on distributing $1m to help improve policing – expressed sympathy with the difficulties faced by officers. They are routinely put into difficult situations created by others - particularly the rich and powerful. Drug laws, for example, are more likely to be enforced against blacks than whites, because police patrol black neighbourhoods more than wealthier enclaves.

“This is a toxic stew that we ask somebody else to waltz into and somehow take care of it, and I don’t think America has been paying much attention,” Mr Rybak said. – Copyright The Financial Times Limited 2020