Death was a homicide, pathologist’s report concludes, as family calls for further arrests 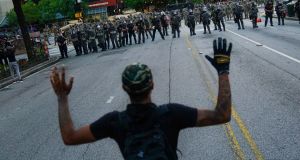 A man raises his arms during a demonstration in Atlanta, Georgia on Monday against the death of George Floyd in police custody. Photograph: Elijah Nouvelage/Getty Images

The family of George Floyd, whose death in police custody in Minneapolis sparked protests across the world, has called for the four men involved in the incident to be arrested, as a new autopsy report deemed his death to be a homicide.

An independent autopsy commissioned by Mr Floyd’s family found that he died of asphyxia and a loss of blood flow to the brain – contradicting an initial preliminary report which found that the autopsy “revealed no physical findings that support a diagnosis of traumatic asphyxia or strangulation”, and pointed to Mr Floyd’s pre-existing heart conditions.

Mr Floyd died after a police officer pressed his knee into his neck for several minutes as he lay handcuffed and face down on a street groaning and saying repeatedly “I can’t breathe.”

While all four men were fired, only the officer who held his knee to the detainee’s neck – Derek Chauvin – has been charged with a criminal offence. Mr Chauvin was charged with third-degree murder and manslaughter last week.

Mr Chauvin was due to appear in court on Monday in Minneapolis, but that appearance was put back until next week. The 44-year-old, who was employed by the Minneapolis police department for 18 years before he was fired last week, was also moved to a maximum security prison from a county jail, officials said.

But the publication of the new autopsy report has put renewed focus on the actions of Mr Chauvin.

The lawyer representing Mr Floyd’s family has said that he wants the charges against Mr Chauvin to be upgraded to first-degree murder. In addition to the new autopsy report, he has also referenced reports that Mr Floyd and the police officer knew each other in some capacity. Mr Chauvin had 18 previous complaints filed against him, though the nature of those complaints is unclear.

Although no charges have been brought against the other three police officers who arrested Mr Floyd and were present when his body grew lifeless, Minneapolis chief officer Medaria Arradondo said he believed that all four men were complicit.

“Being silent or not intervening, to me, you’re complicit. So I don’t see a level of distinction that’s very different,” he told the brother of Mr Floyd in an emotional TV interview.

The attorney general of Minnesota has been appointed by governor Tim Walz to oversee a case that has reverberated across the United States and renewed questions about police brutality and systemic racism in the American criminal justice system.

Another brother of Me Floyd visited the scene of his arrest and death on Monday, which has been covered with flowers and tributes to the deceased.

Mr Floyd’s remains are expected to be transported to his home town of Houston, Texas for his funeral.

The city of Minneapolis remained under curfew again on Monday night after Mr Walz extended the curfew for another two days in the twin cites of Minneapolis and St Paul. There were 246 arrests made in the greater Minneapolis area late on Sunday and into Monday morning as protests continue in the midwestern city.

In a dramatic scene caught on camera, a truck drove through a main thoroughfare, though no bystanders were struck during the incident. Addressing what he described as the “horrifying image on our television”, Mr Walz said that the truck driver had been arrested and investigators were still examining a motive for the apparent attack.

State officials across the country have deployed a massive show of force as cities have grappled with continuing violence. In many cities, including Philadelphia, New York and Washington DC, protests were for the most part peaceful, taking a more destructive turn as day turned to night and curfews were enforced.

The National Guard was deployed to several states and Washington DC to give support to local police forces, some of which were ill-equipped to deal with the mass demonstrations that have been taking place, in defiance of social-distancing rules in place because of the Covid-19 pandemic that has claimed more than 103,00 lives in the United States.

More than 4,000 arrests were made across the country at the weekend. The daughter of New York mayor Bill de Blasio was one of hundreds arrested in New York on Sunday night.

Later in the day, Mr Biden was due to hold a virtual call with several Democratic mayors who have found their cities on the frontline of the protests, including Lori Lightfoot, the mayor of Chicago, and Keisha Lance Bottoms of Atlanta, who has been touted as a possible vice-presidential pick for Mr Biden.